It is immediately obvious that Monterey Park is unlike anywhere else in California.

The small city of around 61,000 people is eight miles east of downtown Los Angeles but could be a different country, with its Chinese supermarkets, dumpling restaurants and shop signs written in Chinese alongside English.

More than 65% of the people who live here are Asian American. It is, as one scholar described it, “an ethnic enclave in the suburbs that thrives because it refuses to assimilate, instead unapologetically catering to its own immigrant community”.

Still, it is not immune to the most American of tragedies. But even as Monterey Park comes to terms with 10 people shot dead during a ballroom dance class, there is a quiet and peaceful resolve.

In front of a police cordon on the street where the massacre took place, a group of people kneel and pray, asking their God for strength.

Chinese New Year took place at the weekend and just hours before the shooting the street had been filled with thousands of people listening to live music or buying meat skewers from food stalls.

“It is so horrible, it’s like this happening for many people on a Christmas Eve or something, it’s just terrible,” says Robert Chao Romero, a professor of Asian American studies at UCLA.

On Sunday, families with children wearing traditional Chinese dresses came to Monterey Park from other parts of LA, expecting the second day of the Lunar New Year festival to be under way, but arrived to see stalls and signs being dismantled and police blockades.

When they learned the reason why, they were horrified.

One local woman came to lay flowers but dissolved into tears when she considered the contrast of what this weekend should have looked like for Monterey Park.

Read more:
A day in America is more likely to see mass shooting than not
How do US gun laws work?
Listen: America’s complicated relationship with guns 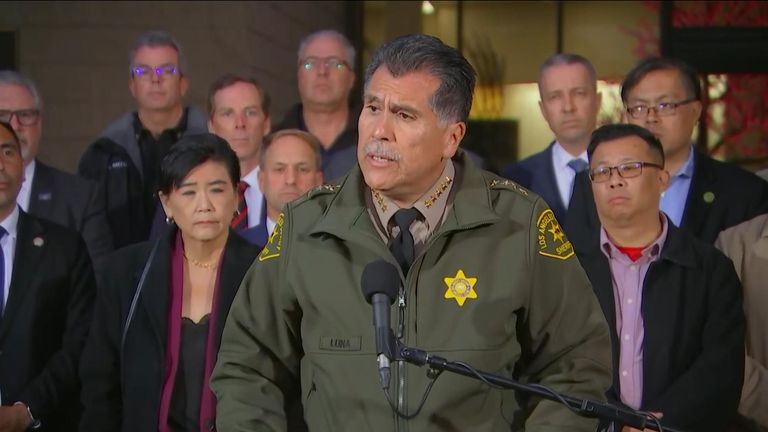 Suspect, 72, shot himself ‘as officers closed in’

“I was so looking forward to celebrating,” says Deanna Trujillo, who is part of a large Hispanic population in Monterey Park.

“It’s extremely painful, it kills me that this is happening to these families. This is one of the most united, kind and friendly communities.

“I might not be celebrating but I wanted to be part of this to let the Asian community know that they are so special to me.”

An evening news conference brought the news that a 72-year-old suspect had been found dead inside a white van 30 miles away in the city of Torrance with self-inflicted gunshot wounds.

The immediate danger was over for Monterey Park, bringing relief to people who had been terrorised for hours, but gun violence is the never-ending scourge of life in America. 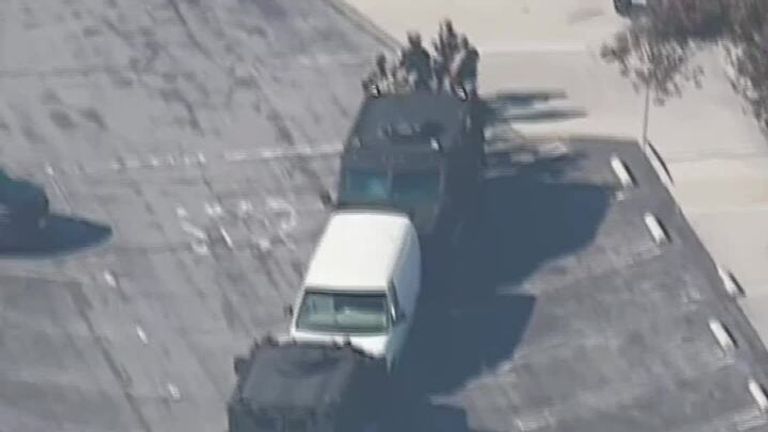 This is the deadliest mass shooting since 19 children and two teachers were killed in a primary school in Uvalde, Texas, last May but it is far from the only one.

Since the turn of the year there have been 33 mass shootings – defined by the Gun Violence Archive as when four or more people, not including the shooter, are injured or killed – in the US.

California has some of the strictest gun control laws in the country but still it was not enough to deter a determined killer.

Another mass shooting has prompted another chorus of calls for tighter gun control, particularly over automatic and semi-automatic weapons, which are designed to kill.

But America’s long list of mass shootings tells us any meaningful change is unlikely in the near future.

Quick Charge Podcast: January 28, 2023
The Celtics have been the one constant in LeBron’s career
Toyota is the latest car company to jump on the electric bike bandwagon
Shop prices yet to hit their peak – despite record highs seen in January
PM was told of Raab’s ‘unacceptable behaviour’ before appointing him to cabinet