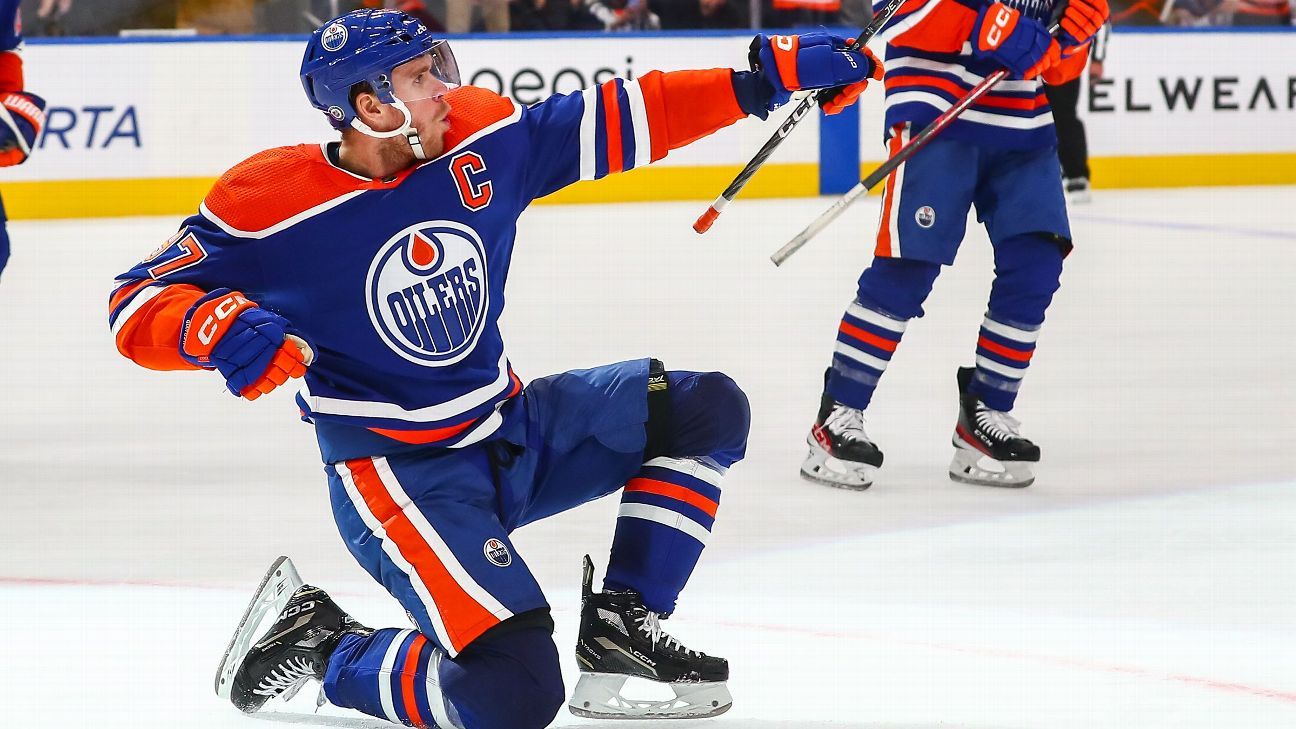 Connor McDavid simply won’t stop scoring. Through 46 games, the Edmonton Oilers‘ No. 1 center has scored 38 goals, which is three ahead of David Pastrnak for the league lead and on a 68-goal pace.

That’s a big number, although it would result in only a tie for 18th overall in league history for a single season. What has been extraordinary is the way he has been scoring them. Simply put: Oilers games — such as Thursday’s tilt against the Tampa Bay Lightning (9 ET, ESPN) — have become a must-watch for both hardcore hockey fans and casual sports observers because one never knows when McDavid will create magic on the ice.

As the 2022-23 regular season carries on, we’re keeping track of all of McDavid’s best goals to relive the moments that have defined his campaign. Check back as the season continues, as this collection will be updated.

Note: Goals are arrayed in reverse chronological order, with the newest ones first.

At 10:23 of the first period of an eventual 6-2 Oilers win, McDavid showed off an exquisite spin move to lose Trevor Zegras, then found room through traffic to land a backhand past Ducks goalie John Gibson. Even the Anaheim crowd couldn’t help but roar in approval:

McDavid isn’t necessarily renowned for his backchecking, but on this night it led directly to another goal. With the Oilers down 5-2 in the third period, McDavid lifted Kevin Fiala‘s stick, snatched the puck, skated in and fired a wrister past Pheonix Copley:

Just 48 seconds into the second period, McDavid took a pass from Mattias Janmark, hit the turboboost and flicked the puck past Kraken goaltender Martin Jones:

Given the star power on the roster, it’s no surprise the Oilers lead the NHL in power-play percentage (30.7% as of Jan. 19). And while some power-play goals come off sustained offensive zone wheeling and passing, others come from giving the puck to the best player in the world at his own blue line and having him stickhandle through the other team:

NHL players are generally pretty fearless; it comes with participating in a high-collision sport. But one wonders what was going through Blackhawks defenseman Jack Johnson‘s head when he saw McDavid coming at him full speed en route to this beauty in a 5-4 Oilers win:

Certain goals made this list because of the singular nature of McDavid’s play, be it the shot or the number of opponents he deked out; some made it because of the game situation. This one checks all of the boxes, as McDavid took a pass from Darnell Nurse, zoomed into the zone while fending off Alex Pietrangelo and roofed it over Adin Hill‘s shoulder for an overtime game winner:

The Canes are once again one of the NHL’s top Stanley Cup contenders, and on this night they defeated the Oilers 7-2. But one of those two was absolute wizardry from McDavid:

It’s a hot ticket for local hockey fans when the Oilers come to town, just to see if McDavid will have a headlining performance. This night at the United Center was no exception: Fans got their money’s worth after seeing McDavid score a hat trick against the host Blackhawks, punctuated by a superb power-play goal in the third period: