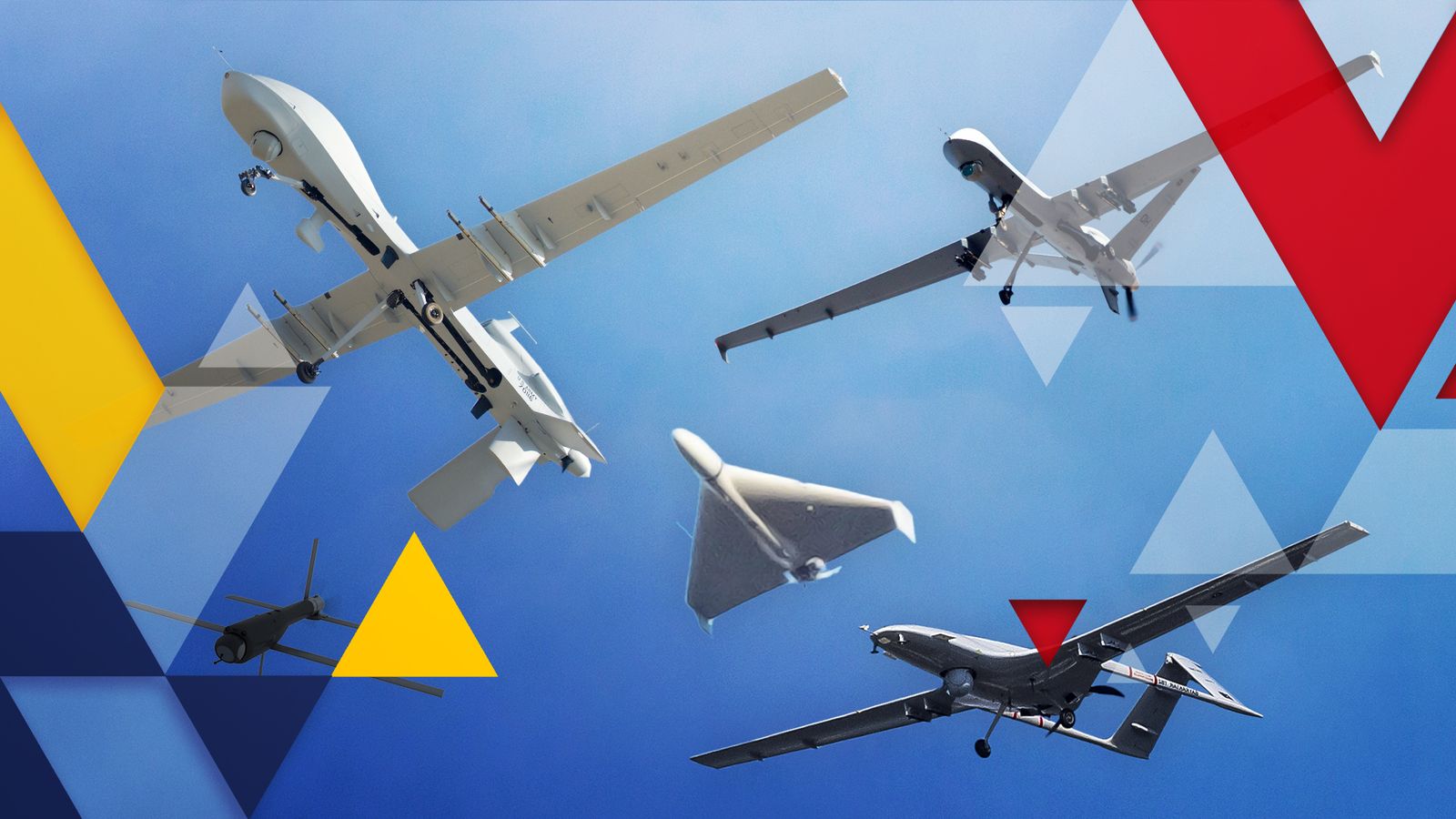 Ukrainian soldiers are using shop-bought drones as their eyes and ears in the trenches or flying them above Russian tanks and dropping grenades through open hatches.

Meanwhile, back in Kyiv swarms of Iranian-made kamikaze drones are wreaking misery and plunging citizens into darkness.

What are the main types of drones being used in Ukraine? Will the US ever send its feared Reapers and Predators to the battlefield?

Sky News takes a look at some of the drones being flown by both sides, and answers some of the key questions.

Shop-bought drones giving soldiers an edge in the trenches

Everyday shop-bought drones are being used to great effect by Ukrainian soldiers as their “eyes and ears”, Stuart Ray from McKenzie Intelligence Services told Sky News.

Soldiers fighting in trenches can use a drone – often the Chinese-made DJI series – to look ahead and gain a huge advantage.

“What you have got really in the last 20 years is the proliferation of what was originally quite a strategic or operational level asset right down now to the tactical level,” he said.

What’s more, social media is awash with videos of the inexpensive drones dropping grenades through the open hatches of Russian tanks, causing a huge secondary explosion as ammunition inside ignites.

The ‘AK-47 of drones’ with a song named after it – how powerful is the Bayraktar TB2?

Manufactured by Turkish company Baykar, the Bayraktar TB2 is the largest drone known to be in use by Ukrainian forces, carrying out surveillance missions and surgical strikes using laser-guided bombs.

Sarah Kreps, professor at Cornell University and an expert on drone warfare, says there was a sense in the first couple of months of the war that the Bayraktars might be “game-changers”, but she says this was down to Russia’s failure to establish air superiority.

She told Sky News: “What happened is with the spring thaw Russian convoys got stuck and these TB2s come in and start taking out Russian tanks.

“But then the Russians figured this out and they started developing better air defences and shooting down the TB2s.”

Compared to the all-purpose AK-47 rifle, the Bayraktar is thought to have been involved in sinking the Russian Moskva flagship in April by distracting the vessel’s radar systems.

Swarms of them are devastating Ukraine’s power supply and their effectiveness is causing militaries around the world to reassess their drone defence capabilities.

Manufactured by Iranian company HESA, the Shahed 136 loitering munition is much smaller than the TB2 and is launched in multiples from a rack in an attempt to overwhelm air defences.

Their numbers make it difficult to shoot them all down, and those kamikaze drones that do get through then detonate on impact.

Switchblade loitering munitions – another kamikaze drone – have been promised to Ukraine by the US.

They are light enough and small enough to be carried by an individual and are launched into the sky using a tube.

Like the Shahed 136, the Switchblade can be guided to its target and will explode on impact.

It’s still shrouded in mystery, but reports have emerged of the use of drone boats in a recent attack on the Russian Black Sea fleet.

Russia says that 16 drones were involved in the attack near the Crimean port of Sevastopol, with two ships suffering damage.

An adviser to Ukraine’s Interior Ministry gave a conflicting account, claiming that “careless handling of explosives” had caused blasts on four warships.

US Army Lieutenant Colonel and drone warfare expert Paul Lushenko says the exact nature of the UAVs used remains unclear but it shows how drones can pose a threat on multiple vectors.

He told Sky News: “It’s just another axis of approach that imposes additional vulnerabilities on Russia.

“There’s only so many target acquisition systems on even these exquisite boats these days.

“And so when you have a swarming of capabilities, how do you prioritise targets?”

Will the US send its deadly Reaper and Predator drones to Ukraine?

Controversial for their use in US counter-terror operations around the world, the MQ9-Reaper and MQ-1 Predator are some of the deadliest UAVs ever made.

Since the outbreak of the Ukraine war there has been speculation about if, and when, the hunter-killer drones would be donated to Kyiv, but thus far they have not been seen.

Lt Col Lushenko says there are a number of reasons why, including that many incorrectly see them as only useful for counter-terror.

There are also questions, he says, about how well Reapers and Predators would survive in high-intensity conflict, with the added worry of the high-tech drones being shot down and analysed by Russian forces.

Others are worried that sending in Reapers would be seen as an escalation by Russia, he said.

Former intelligence officer Philip Ingram told Sky News that an additional concern about sending Reapers or Predators would be the propaganda value for Russia.

He argued that if, and when, one was shot down it would be paraded by Moscow and used to justify the war in Ukraine and accuse the West of direct participation.

So, no Reapers or Predators for Ukraine then? Not necessarily.

Lt Col Lushenko, who edited the book Drones And Global Order, said: “It may take a game-changing sort of activity or event from Russia that would then escalate to the point where (Reaper and Predator) drones may be more palatable.

“So God forbid there’s a use of a tactical nuclear weapon in the conflict, I think at that point all bets are off, you would see capability brought to bear that was otherwise or previously viewed as somewhat escalatory.”

Trump loses bid to avoid handing over tax returns
Scenes of jubilation on outskirts of Kherson
‘Something needs to change’: NHS nurses to go on strike in December over pay dispute
Saudi Arabia wants its investors to own Manchester United and Liverpool
Manchester United owner Avram Glazer confronted in Florida