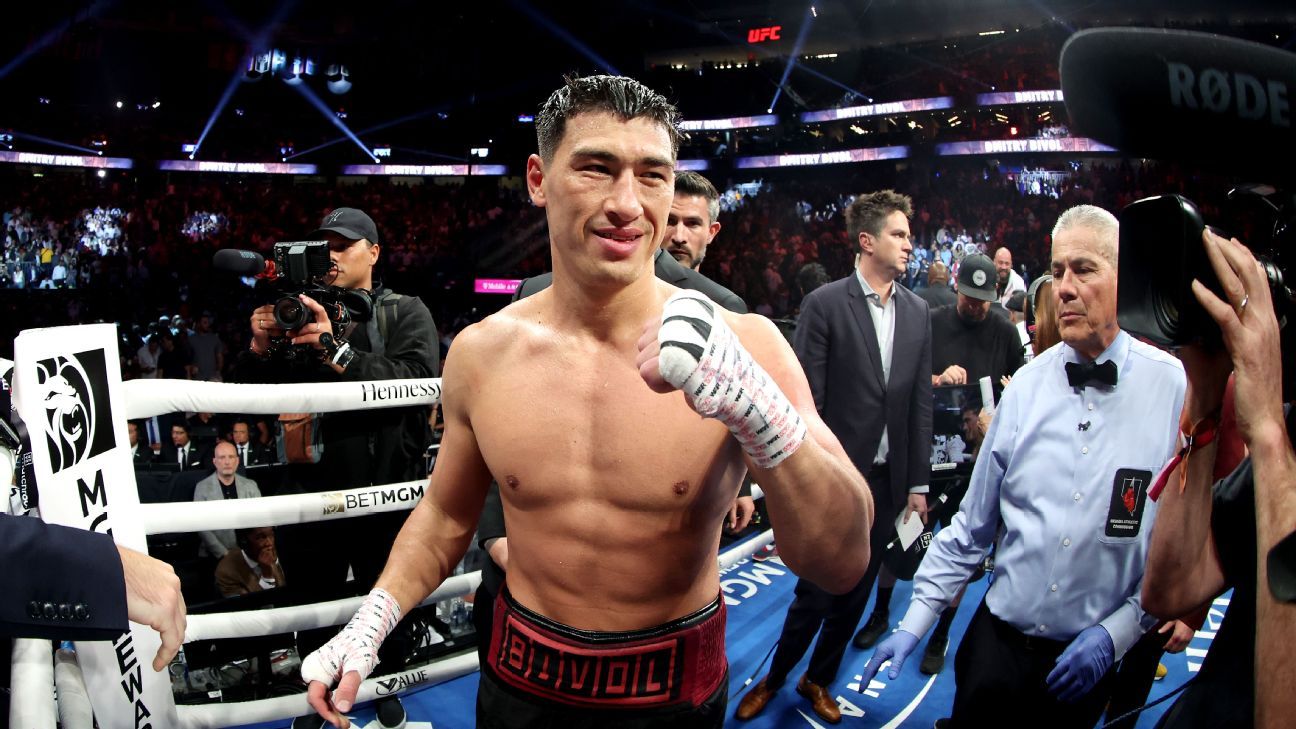 Dmitry Bivol arrived in Las Vegas this May as an afterthought. “The Canelo Alvarez Show” was in town — and attracting all the attention.

Bivol was the WBA light heavyweight champion, and Alvarez, boxing’s top star, already had a deal in place to face Gennadiy Golovkin in September for a third time — once he took care of business against Bivol, a 4-1 underdog.

The matchup, it turns out, was as lopsided as it was surprising. Bivol proved why he had been desperately avoided by the sport’s top fighters for years, earning a unanimous decision over Alvarez, then the pound-for-pound king, and spoiled plans for the third superfight with GGG — or so Bivol thought.

While still in the ring celebrating his victory over Alvarez, Bivol (20-0, 11 KOs) told promoter Eddie Hearn, “Sorry I broke your plans with Gennadiy Golovkin.”

Top Rank Boxing is now on ESPN and ESPN+. Subscribe to ESPN+ to get exclusive boxing events, weigh-ins and more.

But rather than exercise his rematch clause and head into a second consecutive bout with Bivol, Alvarez chose to instead face GGG in the trilogy bout — and prevailed.

Bivol, meanwhile, was left to attempt to lock up fighter of the year honors on Saturday in Abu Dhabi, United Arab Emirates, when he puts his WBA light heavyweight title on the line against Gilberto Ramirez (DAZN, 1:30 p.m. ET).

A matchup with “Zurdo” Ramirez, a top light heavyweight contender and former super middleweight titleholder, is an intriguing fight for Bivol. But a bout against a fighter with a relatively low profile in the Middle East is a far cry from a rematch in Las Vegas with Alvarez, the biggest star in the sport.

Still, Bivol should have ample opportunity to parlay the win over Alvarez into more big fights befitting his new status, especially if he can handle Ramirez, a formidable opponent, in convincing fashion.

The life-altering victory also moved Bivol one step closer to his dream.

“I want to be undisputed champion, you know?” he said. “Doesn’t matter against who.”

Right now, the other three 175-pound titles are held by fellow Russian Artur Beterbiev, a dangerous puncher who is boxing’s only champion with a 100% knockout percentage. Like Bivol, Beterbiev is on ESPN’s pound-for-pound list (Beterbiev is No. 7; Bivol is No. 8), and Beterbiev also is ESPN’s No. 1 light heavyweight (Bivol is No. 2).

There’s no bigger matchup for Bivol than Beterbiev, but when you add in the undisputed championship, the fight reaches an entirely new level. It would serve as the perfect encore for Bivol next year — a matchup befitting a man who knocked off Alvarez, the top fighter in all of boxing.

It’s difficult to overstate just how impressive Bivol’s victory over Alvarez was. Alvarez was seemingly invincible entering the matchup, and for proof, look no further than the odds. Bivol has long been recognized as an elite talent, but Alvarez was riding such a hot streak that most observers and fans gave Bivol little chance.

Since Alvarez’s loss to Floyd Mayweather in 2013 as a green 23-year-old, he hadn’t lost a single fight until he met Bivol. And besides the two previous bouts against GGG, Alvarez hadn’t even lost many rounds.

But against Bivol, Alvarez had no answers whatsoever. The official scorecards were incredibly generous in the Mexican’s favor, with all three judges scoring the fight 115-113, meaning Alvarez won five rounds. In reality, one can argue that Alvarez won just two or three rounds.

“Much more people recognize me and stop me, take a photo with me.”

Bivol used his excellent jab — one of the best in the sport — an uncanny sense of range and, most surprisingly, five- and six-punch combinations to not just befuddle Alvarez, but punish him.

The way Bivol was able to deliver punches in bunches while standing right in front of a great defensive fighter was impressive. It was also entertaining, a stark departure from Bivol’s usual fighting style.

In his three previous fights heading into the Alvarez matchup, Bivol scored 12-round victories over far lesser boxers in Umar Salamov, Craig Richards and Gilbert Castillo Rivera. In those performances, Bivol boxed carefully from the outside, making the bouts far from aesthetically pleasing.

But in the face of one of the most imposing punchers in the sport, Bivol elected to trade.

The manner in which he won raised the thirst for a summit meeting with Beterbiev. It’s a bout that was eyed for this past spring in Bivol’s hometown of St. Petersburg, Russia, according to his manager, Vadim Kornilov. When the Alvarez opportunity presented itself for Bivol, Beterbiev moved on quickly to score a second-round TKO of Joe Smith Jr., to add a third belt.

And now that Beterbiev has recovered from surgery on his right knee, he’s slated to defend his unified championship against Anthony Yarde in January. Assuming Beterbiev wins, as expected, there’s optimism a deal can be struck to pit Bivol vs. Beterbiev later in 2023 in one of the best fights boxing can deliver.

“Much more people recognize me and stop me, take a photo with me,” Bivol said of his newfound fame.

Said Kornilov: “He came back to L.A. to visit for a little bit… goes to any shop or restaurant, a lot of people from Latin America, Mexicans, all these people are recognizing him and paying him respect, which is great. These guys, they know what boxing is about. They know what it means to beat someone like Canelo.

“I think people realize that probably he is one of the biggest fighters in Russia. But besides that, he’s got a fan base in [South] Korea [Bivol’s mother is Korean]. I know [South] Korea is going to be showing the fight live with Ramirez. He’s got a big fan base in Kyrgyzstan [where he was born]. He just went to camp over there.”

Bivol has a chance to raise his growing international profile even more if he can defeat Ramirez, another Mexican, in the same manner he dispatched Alvarez.

Ramirez (44-0, 30 KOs) didn’t engage often during his 168-pound title reign, but he scored stoppages in all five of his 175-pound title fights and remains undefeated.

“I can’t wait to prove to everyone and to myself that I can do this,” said Ramirez, 31. “Bivol is a tough guy. He’s a really good challenge. But I am going to avenge the Mexican population since he beat Canelo.”

If Bivol defeats “Zurdo,” ESPN’s No. 3 light heavyweight, the victory should wrap up fighter of the year for Bivol in a campaign where few top boxers competed twice.

“I got a lot of experience, [but] it’s not even a boxing experience, it’s life experience too,” Bivol said of the showdown with Alvarez. “People talk bad things about you. Even people don’t believe in you. You have to move forward, believe in yourself, train, focus.”

Now, Bivol is ready to cash in. And already, he’s ensured one thing: He’ll never again be an afterthought in any fight.

Get ready for a prolonged downturn that’s worse than 2000 or 2008, billionaire VC Doug Leone says
Business should ‘look to British workers not immigrants’
Journalists who helped bring down Weinstein ‘flabbergasted’ to see their work turned into film
U.S. oil giants Exxon Mobil, Chevron and ConocoPhillips challenged over ‘secretive’ tax practices
Raab says he has ‘behaved professionally at all times’ after bullying allegations