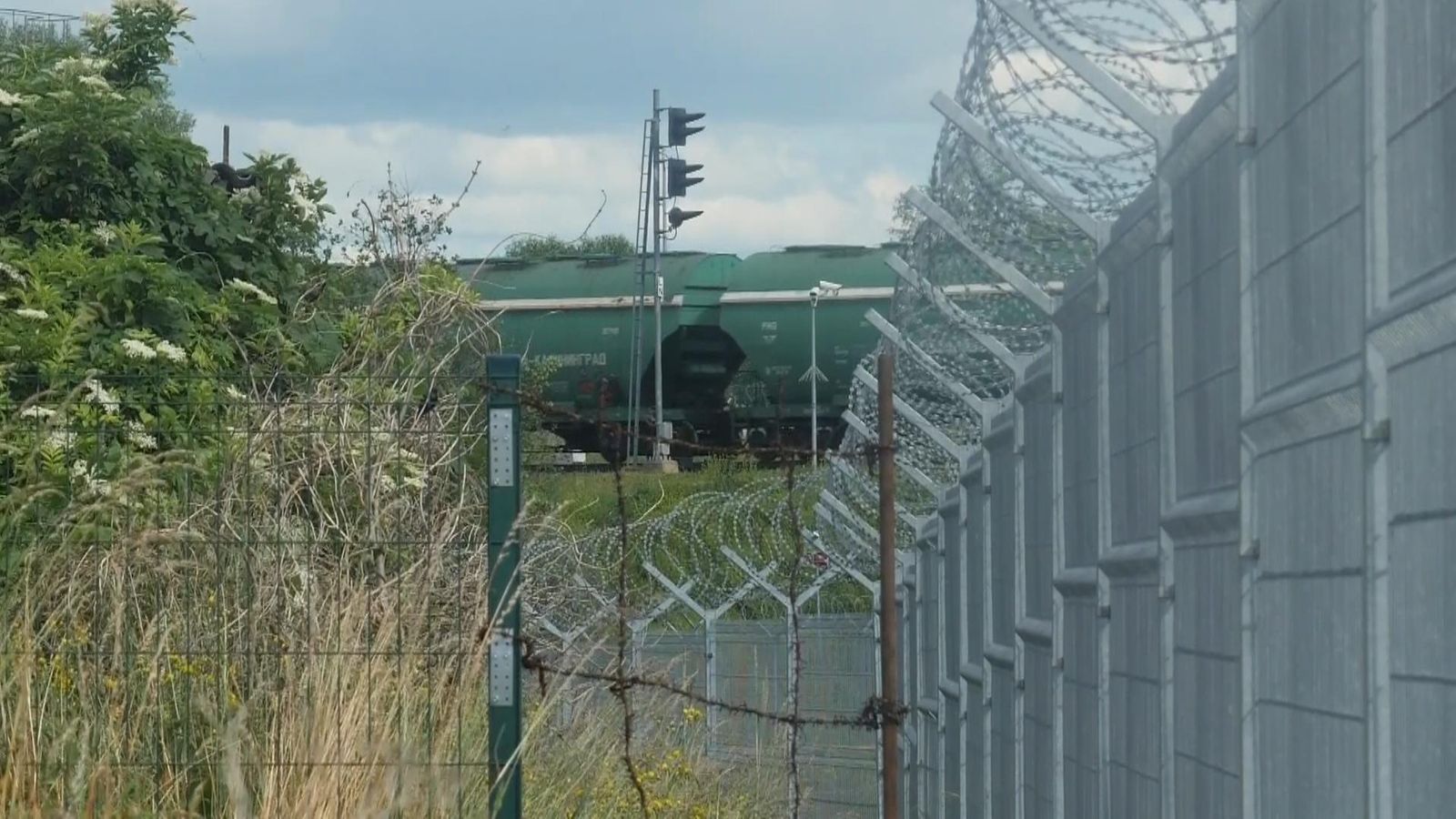 Kyrbartai, in the south-west corner of Lithuania, is not a town that feels like it was designed for fame.

Nobody comes here to admire the architecture or dwell on the natural beauty. It’s hardly tranquil or relaxing – a steady stream of lorries thunder along its main road. To be honest, it’s not particularly welcoming to visitors.

But it is well-visited, and it is important. Because as you round a corner near the top of Kyrbartai, the town comes to a sudden end. There in front of you is a border crossing, and beyond that you leave the European Union and enter Russian soil. Welcome to Kaliningrad.

It is a geographical, political curiosity. Kaliningrad was taken by Russia as a spoil of war and it’s kept it ever since – an exclave the size of Northern Ireland; a thimble by comparison with mainland Russia.

And yet, what a very strategically important thimble it is. Kaliningrad has the Baltic Sea to its west, allowing for the growth of a large military port to go along with the troops and missiles that are stationed in the territory.

Lithuania wraps around its north and east; to the south lies Poland. In other words, Kaliningrad is a chunk of Russia sitting firmly within the bounds of the EU. A fox living quietly within the hen house.

For decades, a sort of resigned peace has reigned. Russia said it would not position nuclear warheads in the area and Lithuania allowed supplies to be brought in on daily cargo trains. But now that has changed, and Kaliningrad has become the catalyst for a simmering diplomatic showdown.

Explainer: Where is Kaliningrad and how will Lithuanian sanctions affect Western relations?

The reason is Europe’s various packages of sanctions against Russia. Only recently have these been extended to include the contents of those trains, running from Moscow to Kaliningrad.

They may start and finish on Russian soil but they cross the EU on the way, so the sanctions kick in. That means no more building materials, steel, vodka or high-tech equipment, among other things.

Russia portrays this as a blockade – a breach of international law. Lithuania, and the EU, says it is nothing more, or less, than the sanctions that have already been levied. Russia has promised reprisals, potentially including disrupting Lithuania’s electricity supply. Lithuania has asked for more troops to be sent to protect the country.

Tensions have risen. A row about whether a daily train can carry bricks and booze over a border has now degenerated into a geopolitical flashpoint. Lithuania’s Prime Minister, Ingrida Simonyte, said that “any talk of a blockade is a lie”.

Analysis: Lithuania: How the West is fighting Moscow under the threshold of all-out war

‘If Ukraine loses then Lithuania will be next’

Most of her citizens seem to agree, but there are exceptions. Here in Kyrbartai we bump into Virgilius and Tomas, young men who both grew up locally and have spent their lives near the border.

“Are you nervous about what is happening?” I ask them. “No,” says Tomas, “look around you – everything is fine.” Virgilius agrees, telling us he’s certain that things will eventually return to normal.

“We are closer to Europe, of course, but we have friends in Kaliningrad. They are good people but they just have a bad government.”

But then there’s Irina, who we talk to in Vilnius, the capital. She was born in Russia, but her parents brought her to live in Lithuania when she was just a young child.

She says that she is now “afraid and angry” about Russia’s actions, and fearful that “if Ukraine loses then Lithuania will be next”.

It is that nervousness that percolates through this country. Logically, Lithuania knows it has the power of NATO and the EU to support it, but fear is not always a logical emotion.

Besides, Russian reprisals might not take the form of a military assault but instead a series of lower-key actions that can disarm a country without provoking a war.

It is the uncertainty that can exhaust you. For Lithuania, confronted by the vast power, size and strength of Russia, that is intimidating.

Kaliningrad may be a geographic and political oddity but, for the moment, it must seem like a very unwelcome burden for this nation.