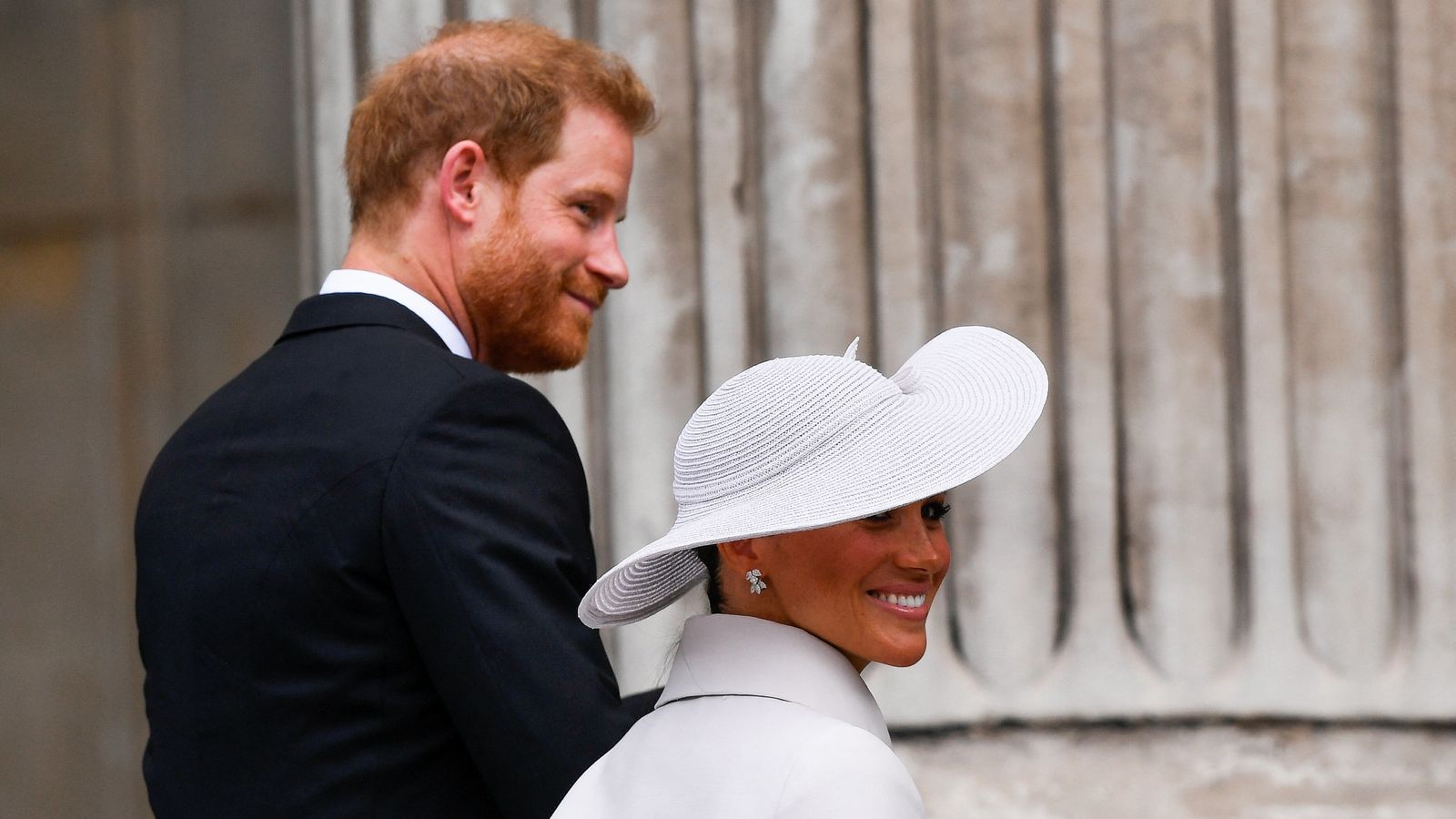 The Duke and Duchess of Sussex have been reunited with their family in public for the first time in over two years for the Queen’s Jubilee thanksgiving service.

Harry and Meghan arrived at St Paul’s Cathedral for the service minutes before the Duke and Duchess of Cambridge, who came without their children Prince George, Princess Charlotte and Prince Louis.

The Prince of Wales and the Duchess of Cornwall followed, with Charles representing the Queen.

The 96-year-old monarch was “reluctantly” forced to pull out after experiencing “discomfort” during the first day of celebrations and will be watching at home in Windsor instead.

There were several other royals at the service, including Princess Anne, the Earl and Countess of Wessex, Princess Beatrice and Eugenie, Zara and Mike Tindall, the Duke and Duchess of Gloucester, and Prince Michael of Kent.

Prime Minister Boris Johnson and his wife Carrie arrived to a mixture of cheers and boos from the crowds, some of whom had camped out overnight to see members of the Royal Family and senior politicians turn out for the Queen.

As guests arrived, two members of the Armed Forces collapsed on the steps of the cathedrals and were escorted away by members of the ambulance service.

Both Harry and Meghan have not been seen in public together with the Royals since the Sussexes final engagement as working royals – the Commonwealth Day service at Westminster Abbey in March 2020.

Since then, the pair have started a new life in Los Angeles and given a controversial interview to Oprah Winfrey that claimed members of the royal household made remarks about the colour of their son’s skin.

Harry also claimed his father had stopped taking his calls and that he hadn’t spoken to his brother.

The Platinum Jubilee is also the first time they have been back to the UK together and with their daughter Lilibet – named after the Queen – who is turning one on Saturday.

There has been speculation Her Majesty will take time out from official proceedings to meet her great-granddaughter for the first time.

After the Queen’s Birthday Parade and balcony appearance at Buckingham Palace, a Palace spokesman said the monarch would not be attending the St Paul’s service due to the “journey and activity required”.

Prince Andrew will also not attend after he tested positive for coronavirus.

The Duke of York had been told to stay away from most of the Jubilee celebrations but was due to be at the thanksgiving service.

Boris Johnson to read from the Bible

The Archbishop of Canterbury will also be at home after testing positive for COVID.

In his place, the Archbishop of York will read a sermon, which will be followed by a passage from the Bible read by the PM.

Former prime ministers, current government ministers and representatives from different faiths are also among the guests, which include 400 key workers, charity volunteers and members of the armed forces.

There is a reception at the Guildhall after the service, featuring a new anthem by Master of the Queen’s Music Judith Weir.

On Saturday the Queen is expected to attend the Epsom Derby before the Party at the Palace concert in the evening.