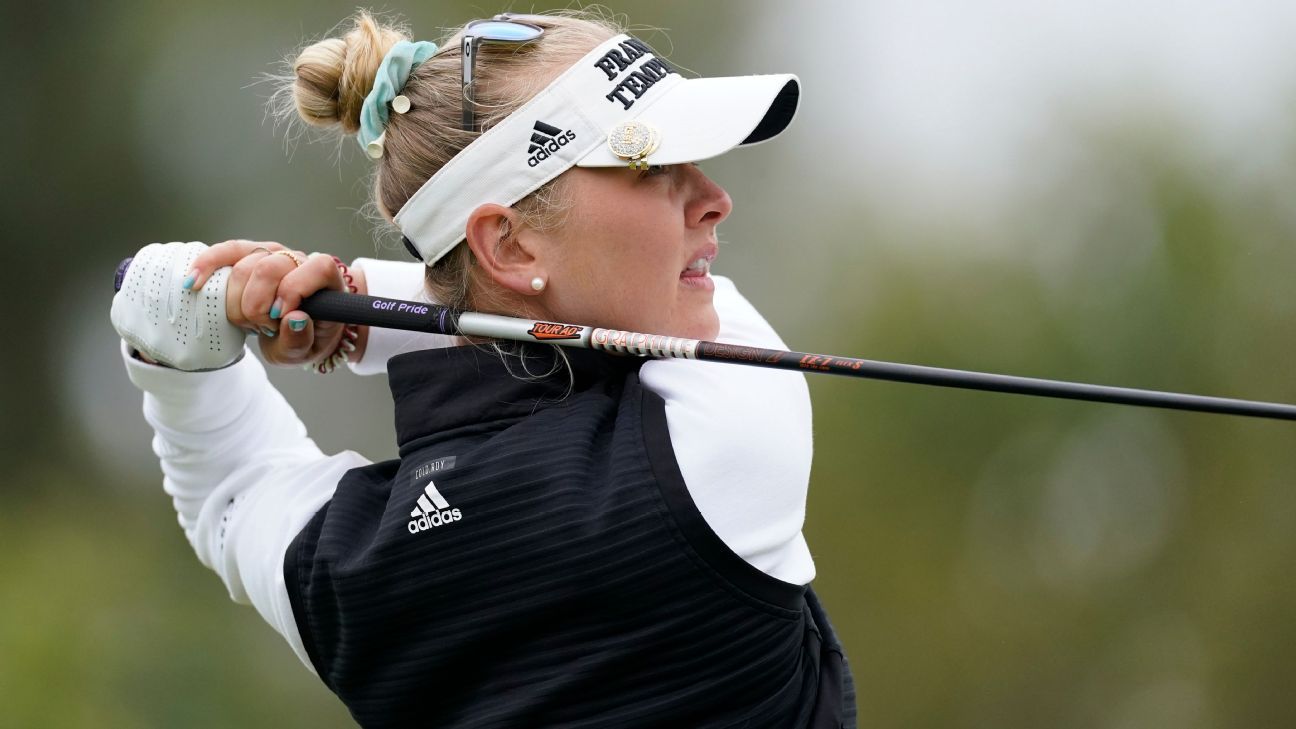 LOS ANGELES — Jessica Korda shot a 6-under 65 on Thursday in the HUGEL-Air Premia LA Open to break the tournament 36-hole scoring record and increase her lead to three strokes.

A day after matching the Wilshire Country Club tournament record with a 64, Korda opened her bogey-free morning round with birdies on three of her first four holes — holing a 15-footer to start on the par-4 10th. At 13-under 129, she broke the event mark of 8 under set by Moriya Jutanugarn in 2018 in the inaugural tournament.

“It’s going to sound crazy, but I actually lipped out a good amount out there today, so it actually could have been lower,” Korda said. “I don’t complain. I know I made a bogey yesterday, but I made up for it with some birdies. Just had a little bit of a harder time with some speed today.”

Top-ranked Jin Young Ko was second after a 65. Playing in the afternoon, she lost a late stroke with a bogey on the par-4 17th.

Fellow South Korean star Sei Young Kim was 9 under. She closed her afternoon round with a bogey on the par-3 18th for a 66.

Korda won the season-opening Diamond Resorts Tournament of Champions in January for her sixth LPGA Tour title, and sister Nelly Korda followed with a victory a month later in the Gainbridge LPGA in the second event of the year.

Jessica Korda has 13 straight under-par rounds. She hit 33 of 36 greens in the first two rounds.

“You’re just plotting your way around the golf course and trying to be smart where we keep it,” Jessica Korda said. “I got above the hole on a couple holes and they’re not easy putts, so you can definitely get out of position really easily out here, so we’ve been pretty I smart.”

She was 17 strokes ahead of playing partners Lydia Ko and Patty Tavatanakit.

Ko, the winner last week in Hawaii in the Lotte Championship at 28-under 260, followed an opening 78 with a 68 to miss the cut. Tavatanakit, making her first start since winning the ANA Inspiration for her first major title and first LPGA Tour victory, shot 75-71.

“I love being paired with Lydia,” Jessica Korda said. “I think I played a practice round with Patty last year. It was kind of just nice to get to know her. She’s super nice and has a very long career ahead of her. But I love my pairing. Anytime I get paired with Lydia, we always have such a great time. It was very easy going.”

Stanford closed with a bogey on the par-4 ninth.

“I didn’t feel great this morning,” Stanford said. “Sometimes, I think that makes me focus a little bit more, so it was really one shot at a time because at any moment I thought it could go south. Probably good that it kind of kept me focused today.”

Michelle Wie West followed an opening 70 with a 77 to miss her third straight cut in her comeback.