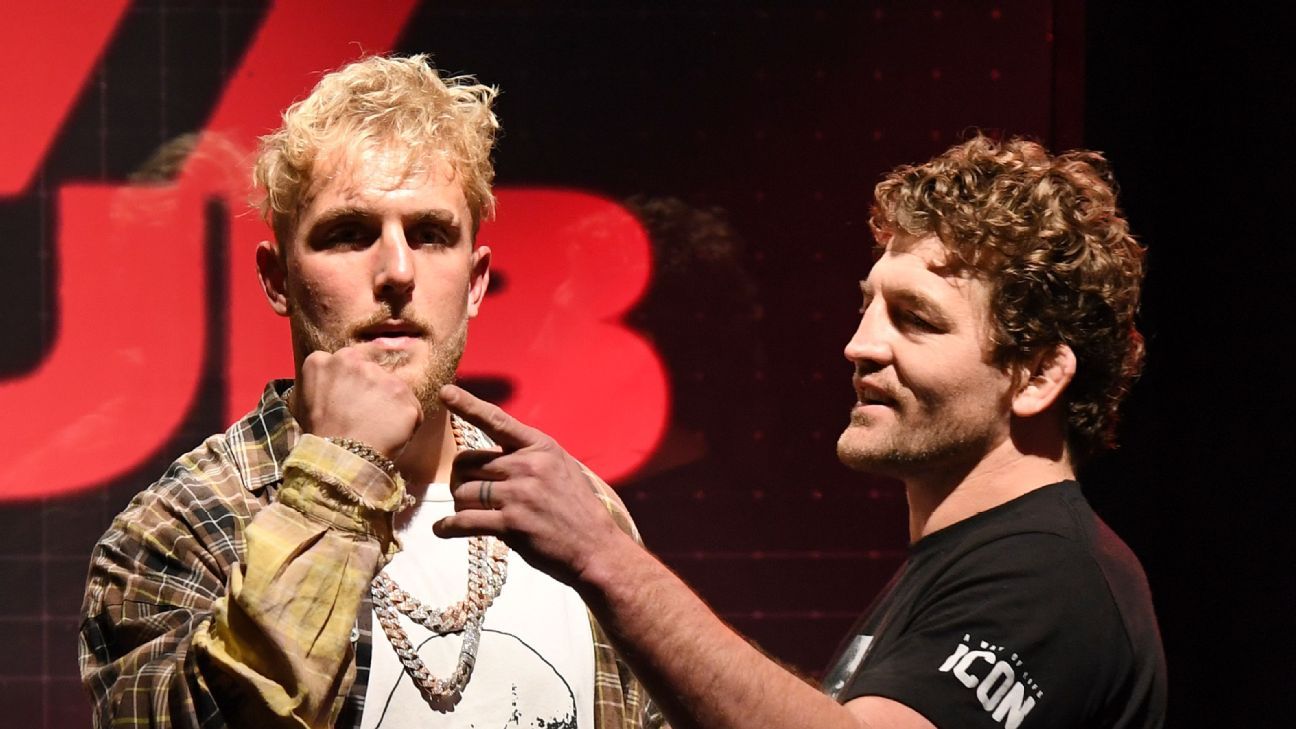 Jake Paul’s fledgling boxing career started out by fighting one of his own.

Last January, Paul made his pro debut against Ali Al Fakri, better known as AnEsonGib, a fellow YouTuber who was more than happy to partake in the spectacle. Paul needed 258 seconds to win via stoppage.

Paul went from fighting a YouTuber to a former pro athlete — ex-NBA star Nate Robinson — and has now upgraded to an actual combat fighter.

This Saturday, Paul will face former MMA fighter Ben Askren in Atlanta in a Triller pay-per-view event. Last week a woman accused Paul of sexually assaulting her in 2019. Paul released a statement on Tuesday denying the claim.

Paul has quietly increased the level of his opposition in the ring, which leads to a natural question: Will Jake Paul ever get to the point where he faces another professional boxer?

So far, Paul’s events have been spectacles. When the 24-year-old was in the ring last November, he knocked Robinson out and turned him into a meme on the undercard of an exhibition bout between Mike Tyson and Roy Jones Jr.

Askren, who will be making his pro boxing debut, is well-versed in combat — albeit, with a major caveat. Askren, a former Bellator and One welterweight champion, is known as a grappler and doesn’t have a history of showing the pugilistic chops to test Paul, who has proved to be a lucrative attraction. Paul will be headlining the first fighting event at Atlanta’s Mercedes-Benz Stadium, the home of the NFL’s Atlanta Falcons and the SEC championship game.

Ben Askren says he isn’t worried about boxing Jake Paul based off the strikers he’s fought during his MMA career.

It’s the type of feat that aligns with Paul’s stated ambitions for the sport.

Both of those things don’t necessarily have to include facing better competition — and Paul has said as much.

“I don’t want to fight anymore unless it’s massive,” Paul told ESPN’s Marc Raimondi in January. “I want every time Jake Paul fights to have an electricity in the air that everyone can feel and people have to tune in. I’m gonna challenge myself, I’m gonna find the right opponent, and I’m gonna stay active.”

When he has fought, he has trained seriously for each of his fights, with twice-a-day workouts and a rigorous regimen. And as long as Paul’s events keep selling, he will be able to avoid a formidable challenge. But if the Ohio native keeps dominating clearly inferior opposition, he might be a tougher sell for casual fans looking for a little entertainment.

That could force him to up the ante and create some doubt about the outcome of his fights. If Paul continues boxing and keeps winning, the sport will likely continue to latch onto the YouTuber in hopes of attracting newer, younger fans. Paul is capable of putting on fights people want to watch, something boxing often fails to do.

Should Paul knock Askren out, and if the PPV sells well, don’t be shocked if Paul is back in the ring for another payday, as another celebrity, athlete or former fighter lines up to be next. But if the current trend continues, Paul might find himself having to face a legitimate boxer, if he wants to keep collecting big checks.

That might be the only thing to keep the turnstiles moving in the Jake Paul Circus Experience.

Jorge Masvidal, UFC welterweight: [Askren] can’t throw a punch, the guy can’t spell “jab.” He doesn’t have it in him to produce the force to hurt somebody with his muscles. … For [Paul’s] size, he has decent hand-eye coordination. Now can I say [Paul is] legit? Hitting the bag he looks smooth. Hitting the pads he looks smooth, and in sparring he’s done some things that look good. But boxing is about fighting, so legit to what level? Are you talking about him fighting with Zab Judah? No. He’s not going to beat Zab Judah. But is he going to beat the s— out of Ben Askren? Legit as f—.

Ben does have experience. Ben could get him tired, maybe in the fourth or fifth round, Jake’s never been in these areas. Things can happen. As long as [Paul] sticks to what he knows and does what he’s supposed to do, I think he’s a much better athlete, and I think he naturally hits way harder than Ben. I think Jake beats him fairly easy.

Dana White, UFC president (on Mike Tyson’s Hot Boxin’ podcast): Jake Paul isn’t a f—ing boxer. I hope you can bet on this thing, because I’ll bet $1 million that he loses this fight. [Askren] is a decorated wrestler, but he’s actually fought real guys. He’s been a world champion in other organizations for MMA.

Timothy Bradley Jr., ESPN boxing analyst and former world champ: This dude Jake Paul trains extremely hard, I’m not gonna lie. He doesn’t play around, but he has very limited experience. I’m gonna have to go with Paul. He’s gonna put it on him, man. Once he goes to the body, this MMA guy is going down. He’s gonna stop him with shots to the body.

Regis Prograis to get back on track against Ivan Redkach

While all eyes will be on the high-profile clash between Paul and Askren, the primary fight on the undercard is a junior welterweight clash between former world titlist Regis Prograis (25-1, 21 KOs) and Ivan Redkach (23-5-1, 18 KOs), who has gone the distance in entertaining fights against former world titlists Tevin Farmer and Danny Garcia. Prograis picked up his first career loss in October 2019, when he lost a tight majority decision to Josh Taylor in a world title unification bout.

Liam Williams was on the brink of the upper echelon of boxing in April 2017, when he fought Liam Smith for the interim WBO junior middleweight title in Manchester, England. But the previously undefeated Williams suffered back-to-back losses to Smith, and thoughts of a world title fight grew dim.

But that moment in his career woke him up. And four years later, Williams is set to fight Demetrius Andrade on Saturday in Hollywood, Florida, in his first proper world title fight with the WBO middleweight world title on the line.

“After the loss to Liam Smith, I realized I needed to make changes and I have also matured a lot since then,” Williams told ESPN. “I moved away from home to train, and it has all fallen into place since then. In 2018 I made the change to train with Dominic Ingle in Sheffield [England]. It was either make the change or pack in boxing.

“Three weeks before the second Smith fight, I was out and steaming drunk. There were other things involved but I just thought this is a joke, I’m a joker and I need to straighten myself out. I really turned it around.

“Aside from me leading a better life and being at the gym with talented and hardworking people like [featherweight contender] Kid Galahad, a lot of it [knockout run of form] has come from myself, being a bit more mature. It’s a case of just maturing and growing up.” — Nick Parkinson

18: Career knockouts for both Demetrius Andrade and Liam Williams, going into their world title fight on Saturday. Andrade did it in 29 pro fights (all wins) while Williams has done it in 26 (two losses, one draw)

443: Total days between title defenses for Andrade. He last fought on Jan. 30, 2020, when he defeated Luke Keeler via ninth-round KO. Saturday’s fight against Williams will be Andrade’s fourth world title defense, after winning the vacant WBO title in October 2018. The other middleweight world titlists are Gennadiy Golovkin (IBF), Ryota Murata (WBA) and Jermall Charlo (WBC).

Ukraine War: What difference will western tanks make?
No 10 admits ‘very difficult’ day ahead as hundreds of thousands of workers go on strike
War in Ukraine: ‘This is not where Russia planned to be’
‘Potentially key’ witness to dog walker’s disappearance found – as friends tell of ‘nightmare’
CNN fact-checks McCarthy’s ‘highly misleading’ claims about Pelosi