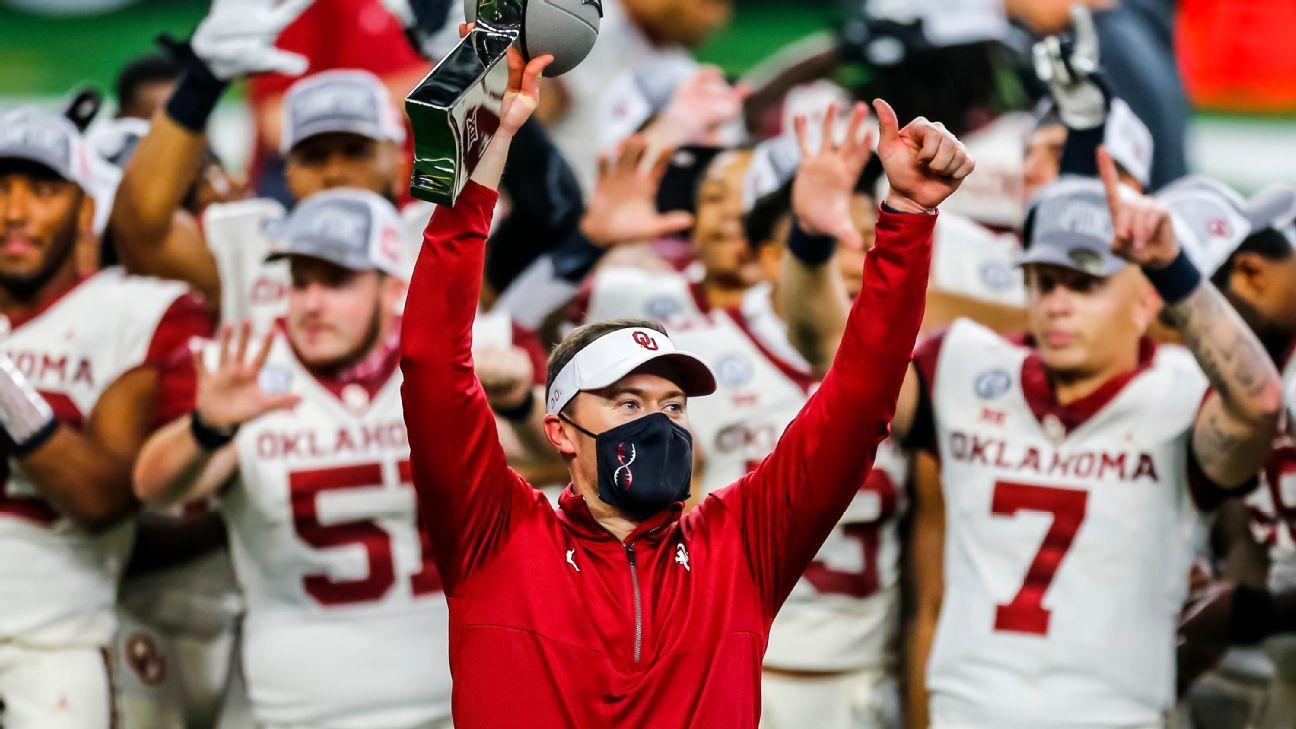 No DeVonta Smith, no Mac Jones … no problem.

Alabama lost plenty of talent to the NFL, but it’s still the best team in college football and the national championship favorite, according to ESPN’s Football Power Index (FPI) and the Allstate Playoff Predictor.

The Crimson Tide have a 31% chance to defend their title as national champions, substantially up from the 17% our model gave them at this time last season. Alabama also has a 76% chance to reach the College Football Playoff — again, best of all teams — and is a slight odds-on favorite to win the SEC at 51%.

So without Jones or Smith … or Jaylen Waddle … or Christian Barmore … or Patrick Surtain II, what’s driving Alabama’s No. 1 ranking and stellar projections?

Roster talent. Remember, this is a statistical model: It’s not giving bonus points for Bear Bryant or Joe Namath. But it does know Alabama is probably the best positioned team to replace top departing players given its steadily elite recruiting and Nick Saban entrenched as head coach. The Tide have signed 77 ESPN 300 players in their past four recruiting classes, which is 11 more than any other team.

At the same time, there’s still a 69% chance that the national champion isn’t Alabama. There are some significant challengers, which we’ll get to in a moment.

If you’ve gotten to this point and are wondering: What’s FPI? The short answer is that it’s our statistical rating and projection system for every FBS team in college football. It powers the Allstate Playoff Predictor, which models the College Football Playoff selection committee based on its past behavior to determine the likelihood of teams reaching the CFP. You can read more about how FPI works here. And if you want the full list of FPI’s rankings and projections — today or any day — you can find those at espn.com/fpi.

But back to those challengers. Alabama came out on top in a four-team playoff field with Notre Dame, Ohio State and Clemson last season. But none of those other teams has the next-best shot at winning the title this season. Because 2021 is…

Oklahoma has a chance to strike in a year when Alabama, Clemson and Ohio State all are sending starting quarterbacks to the NFL, while the Sooners bring back Spencer Rattler. Returning talent is a crucial factor for FPI, and a returning (good) quarterback is the best preseason positional asset a team can have. That’s a big reason why the Sooners are FPI’s No. 2-ranked team.

Rattler ranked 11th in QBR last season. That is low relative to the dominance of OU quarterbacks Baker Mayfield, Kyler Murray and Jalen Hurts who preceded him but very high for a returning quarterback overall. With Rattler — along with most of the Sooners’ pass-catching production — back for 2021, Oklahoma has the best offense in the country, FPI believes.

While Riley teams are known for their offenses — and this year’s team is no exception — FPI believes the Sooners’ defense will not be a liability, ranking the unit 15th among FBS teams.

As we mentioned, the Sooners are catching Alabama and Clemson — FPI’s third-ranked team — at what seems like a good time. But Oklahoma does have one surprising challenger from within its own conference. Because the fourth-best team in the country, per FPI is …

Push aside, Georgia, Ohio State and Notre Dame. The Cyclones have shoved their way right into FPI’s top four and have the fourth-best shot to win the national championship at a long shot but not totally outrageous 9% chance.

Let’s start with the obvious: Iowa State is coming off a strong season — one that had it on the fringe of the playoff — and, like Oklahoma, is returning a strong quarterback in a year when many of the usual contenders are not. Brock Purdy finished 15th in QBR last season, just a couple of spots below Rattler and only one rank behind another QB who is getting plenty of buzz: North Carolina‘s Sam Howell.

Offensively, Iowa State also brings back major contributors in wide receiver Xavier Hutchinson, tight end Charlie Kolar and running back Breece Hall. But the Cyclones are ranked fourth by FPI because the model considers the team a top-10 unit on offense and defense.

While Iowa State has the sixth-hardest schedule in the FBS, it is helped by the fact that it can still lose to Oklahoma in the regular season and make the conference championship game (and have a shot at being a one-loss champion). That regular-season contest in Norman in November, which the Sooners have a 70% chance to win, has the second-largest impact on the playoff race of any scheduled game, only behind Alabama at Texas A&M in October.

The Cyclones aren’t normally fixtures of FPI’s top four. But given the circumstances of this team’s performance last season and who it’s bringing back, it’s not that wild to see them up there. But you might have noticed another team on FPI’s top 10 list that is quite shocking. That team is …

First: the defense. Mississippi State finished last season with the 18th-most efficient defense in the country. If that’s surprising, remember that our efficiencies are opponent-adjusted. A defense can look a lot worse in the SEC than the Pac-12 but still be better. And FPI thinks that the Bulldogs’ defense will step up further in 2021, in large part due to significant returning defensive back experience.

Offensively, there’s reason for optimism too. To be clear: FPI does not think Mississippi State’s offense was good last season. It ranked 94th in efficiency. But still, it does believe coach Mike Leach and the Bulldogs’ offense will improve this year, in large part due to their experience at quarterback. Mississippi State will likely have either Will Rogers (who threw over 300 passes for the Bulldogs last year) or Jack Abraham (who played three seasons at Southern Miss) under center. Even though neither has previously been anything particularly special, the way FPI sees it: Players with a lot of experience (Abraham) or earned experience young (Rogers) are likely to improve a good bit, and the chances that one of them plays much better is quite high.

That said: The SEC giveth (in opponent adjustments) and the SEC taketh (in projected wins). Mississippi State might be FPI’s No. 8 overall team, but it’s also only the fourth-best team in the SEC and the third best in its division. As a result, as much of a believer as FPI is of the Bulldogs, it also only projects them to win 8.2 games.

The Pac-12 is in trouble already

Even worse than usual, actually. I’m used to writing a gloom and doom paragraph about the Pac-12 in our annual preseason reveal, but not like this.

Last season, our model gave the Pac-12 a 28% chance to put a team in the playoff. This year: The entire conference has a cumulative 6% chance to reach the playoff, with Oregon making up five of those percentage points.

The Pac-12 has exactly one team (Oregon) in FPI’s top 25 — which is completely fine if that’s a dominant team. Instead, it is FPI’s No. 17-ranked squad. Don’t forget, the Ducks have a brutal nonconference game at Ohio State. USC, which sits at No. 26 and is the conference’s next-best hope, also has a tough nonconference game at Notre Dame. The lack of dominance and tough out-of-conference games hurt the chances of the Pac-12 champion having zero losses or one loss.

We know the Pac-12 is in a tough spot. On the other end of the spectrum, the SEC retains its usual place as the most likely team to put at least one team in the playoff (95% chance) and to put multiple teams in the CFP (35% chance). But the notable conference this year is the Big 12, which is almost as likely to have at least one team in and actually has a real chance to put two teams in the playoff — which has hardly been a real consideration in seasons past.

The biggest factor here, clearly, is that Oklahoma and Iowa State both rank in FPI’s top four. But it’s also because the conference doesn’t have divisions, so it is easy to imagine, say, Oklahoma beating Iowa State in the regular season but the Cyclones felling the Sooners in the conference championship and both getting in.

Also, the Big 12 actually has four teams in FPI’s top 12, as Oklahoma State and Texas clock in at Nos. 9 and 12, respectively.

Coastal Carolina and BYU earned the affection of football fans across the country last season — especially after squaring off late in the year in a 22-17 Chanticleers victory that was ultimately part of their undefeated regular season. Will they be back?

FPI says: for Coastal Carolina, sort of; for BYU, not as much.

With QB Grayson McCall, who finished 10th in QBR last season, back, the model actually predicts the Chanticleers to have the seventh-best offense in the nation, a substantial vote of confidence. The defense is nowhere near that level though (FPI thinks it’ll be slightly below FBS average), so Coastal’s overall FPI ranking is No. 35 — which is solid but unlikely to reach the fringes of the playoff (!) conversation like it did 2021.

For BYU, the outlook is worse, but that’s logical. Zach Wilson will likely be the No. 2 overall pick in the NFL draft, and for a team to lose such a talent and not recruit like Alabama or Ohio State, it won’t be able to rebound as quickly. BYU ranks 63rd in FPI, nestled in between UCLA and Buffalo.

Who can resist playoff combos, even in April? And while my usual warning with this chart is that any one combination isn’t particularly likely, this year one combination — even months away from the season kicking off — has a 1 in 10 chance to come to fruition. In no particular order, that’s Alabama, Clemson, Ohio State and Oklahoma, a chalky grouping if there ever was one.

Iowa State makes its way into the fold with the second-most likely combo, while Texas A&M, Georgia and Notre Dame all find their way into the likely groupings. As always, these are independent of selection seed.

Full FPI rankings and projections can be found at espn.com/fpi.

Probe into whether Boris Johnson misled parliament over partygate begins with call for evidence
Travis Barker has been rushed to hospital in Los Angeles, according to reports
Third day of rail strikes set to cause weekend chaos – with no trains running in some popular seaside towns
Mississippi’s last abortion clinic faces rush of women trying to beat deadlines of biology and of law
Blow to Biden’s climate agenda as US Supreme Court limits federal power to curb emissions