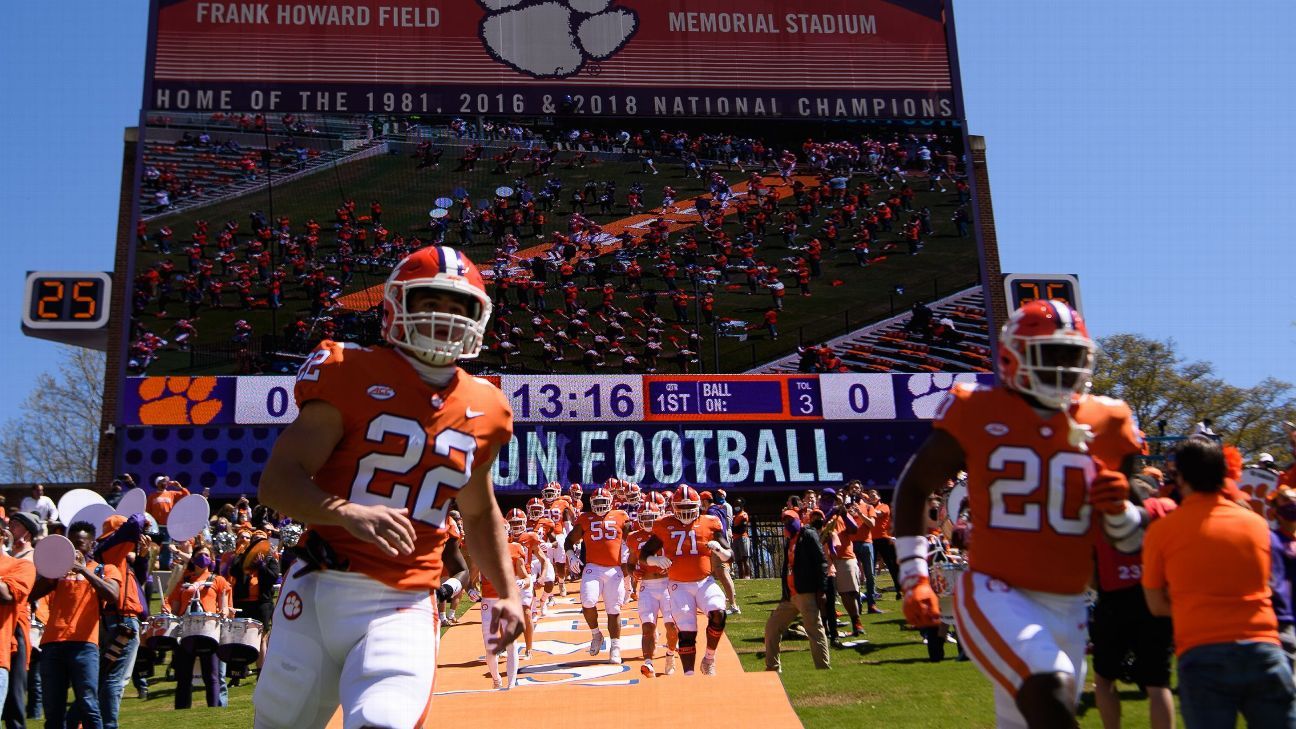 One benefit of all the days blurring together during the pandemic is that it’s already time for spring football, other than the spring football they’re playing over in the FCS, where they’re actually playing real games.

But the FBS fellas are back on the field after the strangest, most trying year. We know you’re hungry for some football and hopefully a little proper tailgating, judging by your reaction to Lincoln Riley’s brisket.

Let’s pitch it around a little bit with David Hale, Harry Lyles Jr. and Dave Wilson:

What gives you most cause for optimism this spring?

Lyles: College football can’t have a more difficult season than we did last year. We saw that we were able to get through a season, despite cancellations and other challenges. Now, we’re getting shots in arms, and hopefully we as a college football-loving people can continue to do what we have to in order to have the most normal season possible. In short, I’m optimistic because we’re simply further along in the pandemic, and I think we can all see a light at the end of the tunnel.

Wilson: Phil Steele is tweeting about which preview he’s finishing up for his preseason magazine. Last year, we weren’t even sure there’d be a season. Much less a preseason.

As far as pandemic-related restrictions, what has changed and what’s the same as the fall season?

Hale: The fact we’re having spring at all is, of course, the biggest change for many teams, but most of the protective measures from 2020’s regular season remain in place — albeit with a sense of normalcy to the routine now. The practice pauses and COVID-19 updates are still happening, but a bit less often, and that’s good news. And some of the tweaks made to the spring — from more refined weight room schedules to less physical contact — are probably here to stay. But as Clemson wrapped up its spring last week, it was a pleasure just to see the sun shining on Death Valley, with at least a few thousand fans in the stands, enjoying something that felt, if not normal, at least a step in the right direction.

Wilson: While normalcy slowly returns, there’s still flexibility, it seems, something we all learned to appreciate. But it’s worth noting that some of that flexibility would be welcome to stick around. Like, say, the ability to schedule a fantastic game like BYU–Coastal Carolina on a moment’s notice instead of planning for 2042. Unfortunately, I think business is back to usual on that front.

Which spring quarterback battles are the most intriguing?

Lyles: I’m interested to see who gets the starting job at Ohio State. Justin Fields was one of the two best quarterbacks in the college game the past two seasons, and the Buckeyes don’t have anybody who’s proven behind him, but there’s certainly talent. Between C.J. Stroud, Jack Miller and Kyle McCord, there are no bad options. Stroud and Miller spent 2020 behind Fields, so they have the most experience on their side. But McCord has a chance to start as a freshman, coming in as a four-star recruit and the 31st overall player in the ESPN 300 for 2021. No matter who gets the job, expectations are going to be elevated because of how accustomed Ohio State fans were to Fields’ great play.

Wilson: Both Texas and Texas A&M are replacing four-year starters in different situations. The Aggies are on the upswing after several stacked recruiting classes and a No. 4 finish last year. The Longhorns are breaking in new coach Steve Sarkisian after a tumultuous season, albeit a 7-3 finish. Sark will choose between Hudson Card and Casey Thompson. Thompson is coming off a four-TD performance in relief of the injured Sam Ehlinger in the Alamo Bowl, but Card was a highly regarded prospect. In College Station, Haynes King was the backup as a true freshman last year and has dual-threat potential, while redshirt sophomore Zach Calzada has a huge arm. Both Sark and A&M’s Jimbo Fisher are accomplished QB gurus who know what they want. We just have to wait to see if they see it.

Which coaching situation are you keeping your eye on?

Wilson: It’s spring! Optimism abounds! I’ll eschew the hot seat for now, and I’ll say Iowa State and Matt Campbell, but only because I am eager to see what kind of magic the Clones can produce this year with all that talent returning. As far as newcomers, Sarkisian and Texas opening with Billy Napier’s salty Louisiana squad has extreme overreaction potential for fans — either way.

Lyles: I want to see what Jamey Chadwell does to follow up Coastal Carolina’s surprisingly great 2020 season. Grayson McCall is back after throwing for 2,488 yards and 26 touchdowns as a redshirt freshman, and despite a couple of key losses in DE Tarron Jackson and RB CJ Marable, the Chants are still in position for another good year. I think with another great year, Chadwell could pull a hefty buyout from the wallet of somebody at a Power 5 school.

Hale: I’m paying close attention to the many second-year coaches out there who are just now getting their first taste of a real spring with their teams. At Baylor, Dave Aranda missed last spring, dealt with interminable delays to the season, then upended his offensive staff. At Florida State, Mike Norvell lost out on meaningful culture-building time last offseason, and it showed — with multiple off-field dust-ups (largely based on miscommunication and lack of trust) and a bevy of in-season departures. At Mississippi State, Mike Leach pulled off a Week 1 stunner and then his team forgot how to move the ball, but he has always shown big gains in Year 2. Add in Greg Schiano, Jimmy Lake, Mel Tucker, Jeff Scott — the list of coaches who’ve had a year on campus but are just now really getting their footing is long and fascinating.

Which newcomer (transfer or freshman) is worth watching?

Wilson: Hey, here’s a surprise: Oklahoma is going to be scary good on offense. Marvin Mims was a star as a freshman, and Mario Williams Jr. looks to be this year’s star addition. Quarterback Spencer Rattler recently said Williams looks like he could be the fastest player on the team in spring drills, and Riley said the Sooners weren’t happy with the performance of the overall WR group last year and that everyone would start on even footing this year.

Lyles: McKenzie Milton at Florida State. The Seminoles haven’t been relevant since 2016, and I think it would be pretty neat if Milton was able to lead Florida State back to any sort of success given his own struggles. Milton dislocated his right knee and suffered ligament, nerve and artery damage against UCF in November 2018, and he hasn’t played since. Milton has the most experience of the quarterbacks competing for the starting job in Tallahassee and apparently has felt good in the spring. If he’s like his old self, it’s going to be his job to lose.

Hale: Milton is probably my answer, too, but for the sake of diverse discussions, let’s talk about Ty Thompson at Oregon. With Tyler Shough‘s departure, the QB1 job for the Ducks is wide open. Yes, Anthony Brown closed the season on the upswing, and his veteran presence might make him the favorite for the job, but there’s also a reason he wasn’t the starter for most of 2020. Thompson’s talent is immense, and as an early enrollee, he has time to adjust this spring (time Brown didn’t get a year ago) that could make him a far more refined player by fall camp. Given the potential for the rest of the Ducks’ roster, Thompson’s potential at QB could be the difference-maker as Oregon looks to end the Pac-12’s College Football Playoff drought.

Wilson: Likewise, though he doesn’t arrive until summer, Texas Tech transfer Alan Bowman will be interesting in what will be a culture shock in many ways at Michigan. Wolverines QBs have thrown for more than 400 yards three times in history. Bowman has done so four times in 16 career starts, including a 605-yard game against Houston that broke Patrick Mahomes‘ Big 12 record for most passing yards by a freshman.

What’s your best bold prediction off the first few weeks of spring football?

Wilson: Remember last year when Ed Orgeron said, “We are so much better on defense right now than any part of the season last year” and was very wrong? That was in September. My bold prediction is that people will be more wrong even sooner this year. Here’s my shot at it: Oregon and the Pac-12 will be back in the College Football Playoff.

Lyles: I think Mr. Wilson is right. The Pac-12’s magic in both the men’s and women’s NCAA basketball tournaments is going to rub off on the conference when the fall comes around, and it will be represented in the CFP.

Hale: Spring predictions aren’t usually good for much. If you listen to coaches, every job is up for grabs, every team has attacked the weight room and every freshman is way ahead on the learning curve. So is there anything worth taking seriously? Clemson’s defensive front looks like it could rival the halcyon days of Christian Wilkins and Clelin Ferrell. Florida State seems to have some actual QB options. Sarkisian is touting “all gas, no brakes,” which could be a reasonable path to running the Texas bandwagon over a cliff. But a lot’s going to happen around the country between now and fall camp, and the best news any team can have when they wrap up the spring is that the optimism that comes this time of year hasn’t diminished too much.

Except at Kansas. There’s no hope for Kansas.