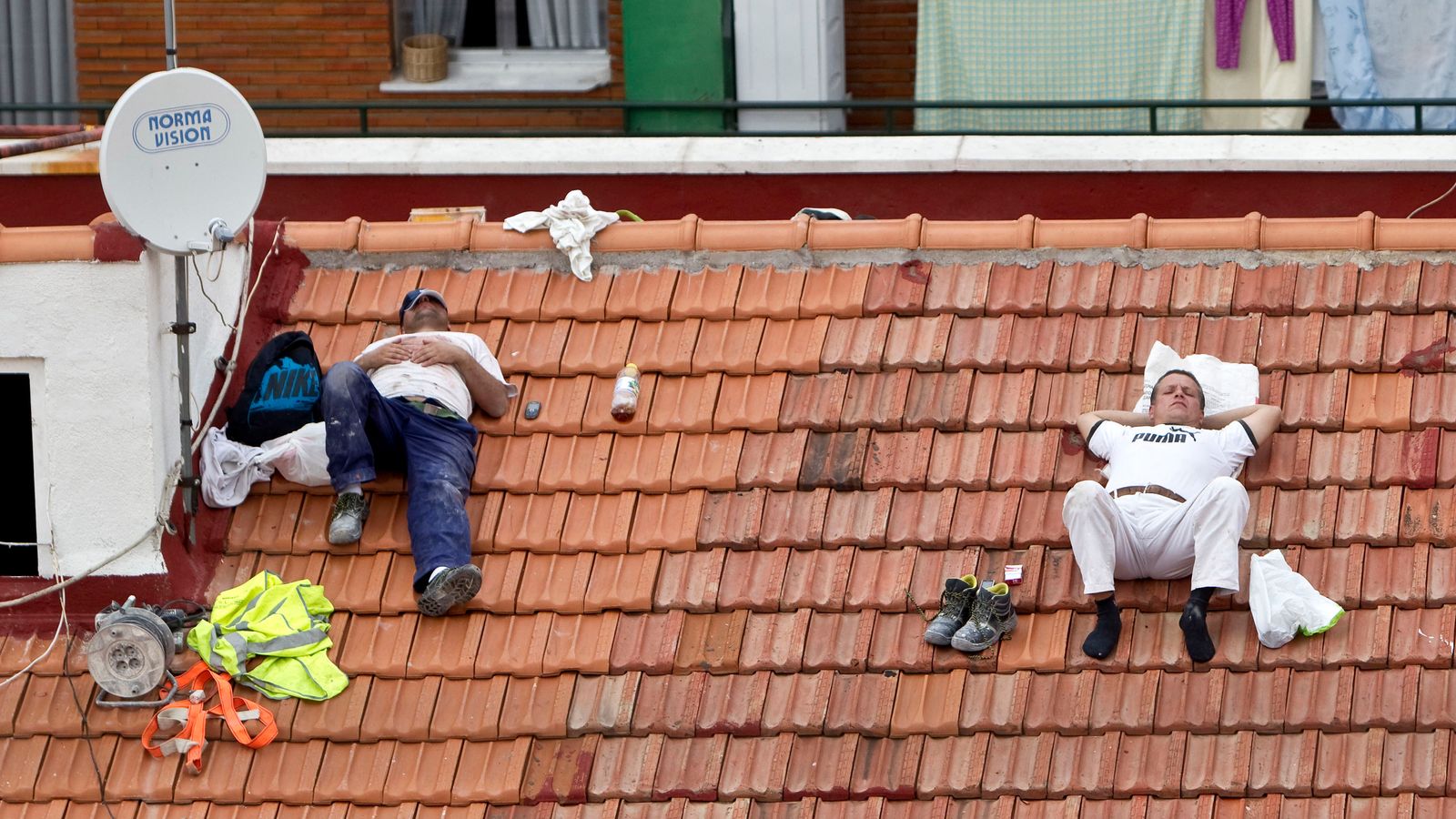 Spain is planning to use €50m (£43m) in EU funds to cut its working week to four days in a bid to prevent further coronavirus outbreaks.

The experiment is set to last for three years and will be funded by money from the European Union’s massive COVID-19 recovery fund.

The money will compensate some 200 mid-size companies as they resize their workforce or reorganise production workflows to adapt to a 32-hour working week.

Live COVID updates from UK and around world

It will go towards subsidising all of the employers’ extra costs in the first year of the trial and then reduce the government’s aid to 50% and 25% each consecutive year.

Hector Tejero, a legislator with Mas Pais progressive party which is behind the initiative, denied it was using EU money for Spaniards to work less.

Mr Tejero said: “It’s not using the European funds for Spaniards to work less – it’s about seeing how we can improve productivity and competitiveness of our companies.”

News of the planned scheme comes on the day 5,000 music lovers are set to attend a rock concert in Barcelona in an experiment to see how effective mass testing is.

The concert-goers will need to pass a same-day quick antigen COVID-19 screening test, before they can go to the event on Saturday evening.

The show by Spanish rock group Love of Lesbian has the special permission of Spanish health authorities who want to analyse the effectiveness of same-day testing in preventing outbreaks of the virus at large cultural events.

While the rest of the country is limited to gatherings of no more than four people in closed spaces, the concertgoers will be able to mix freely, although face masks are mandatory.

People with heart disease, cancer, or those who have been in contact with someone infected by COVID-19 in recent weeks were asked not to sign up.

The show is sold out. The tickets, ranging from €23 to €28 (£20 to £24), include the cost of the test and the high-quality face mask that is obligatory except when eating or drinking at designated areas.

The concert is backed by local authorities and by experts of Barcelona’s The Fight AIDS and Infectious Diseases Foundation, which also organised a case study around a smaller concert of 500 people in December.

They said results of that preliminary case study showed pre-screening with antigen tests and the use of face masks succeeded in preventing infections inside the concert despite there being no social distancing rules.

The two experiments have been devised in an effort to boost the Spanish economy.

Arguments in favour of a mass shift to a three-day weekend say it would lead to more consumption, especially in entertainment and tourism, a backbone of the Spanish economy.

Reducing work hours from 40 to 35 per week in 2017 would have resulted in a 1.5% GDP growth and 560,000 new jobs, a study published earlier this year in the Cambridge Journal of Economics found.

Software Delsol, in southern Spain, invested €400,000 (£343,000) last year to reduce working hours for its 190 employees and has since then reported a 28% reduction in absenteeism, with people choosing to go to the bank or see their doctor on their weekday off.

Their sales increased last year by 20% and no single employee has quit since the new schedule was adopted.

However, the scheme’s critics say a pandemic-shaken economy is not the best scenario for experiments.

With a 10.8% GDP contraction last year – its worst since the Civil War in the 1930s – Spain has suffered from intermittent lockdowns and the near-total freeze in international travel.

Some experts argue the priority should instead be fixing the country’s dysfunctional labour market, which is dragging one of Europe’s highest unemployment rates and is marred by precarious, low-wage jobs.

“There are probably industries or economic areas in which a reduction of working hours won’t necessarily lead to productivity gains,” the economic policy researcher said.

But Mas Pais argues that it is best to try first and decide later on how to scale the scheme up – or to scrap it.

Still, not all unions are fully backing the plan. Conservatives have been defensive and CEOE, the main Spanish business association, has so far offered a lukewarm response to the project.

Nevertheless, at least half a dozen companies have already reached out expressing interest, according to Mr Tejero, who said the pilot will not be launched at least until September, when and if mass vaccination helps revive the economy.

House Republicans pass bill to limit drawdowns on Strategic Petroleum Reserve
The deadly assault draws painful parallels for Americans who are no strangers to videos of police violence
Potential witness sought by police in search for missing Nicola Bulley identified
‘Nobody is born smart’: Ex-commander of Russian mercenary group apologises for fighting in Ukraine
Trump stops to retrieve Marine’s hat