Prime Minister Boris Johnson has hailed the “courage, discipline and patience of the nation” one year after he first announced a lockdown to combat the coronavirus pandemic.

Speaking at a Downing Street news conference, he said: “We suffered so many losses.”

And he said we have at times been “fighting in the dark” against a “callous” enemy but science has helped us “turn the lights on”.

He also said after an “epic of endurance and privations” that “we did it – together”.

In answer to a question from Sky News’ Beth Rigby about what the legacy of the pandemic will be Mr Johnson said the focus must be on education and “remediating the damage, plugging the gaps”.

He said that the “future of the country depends on us now repaying that generation” of schoolchildren and students. 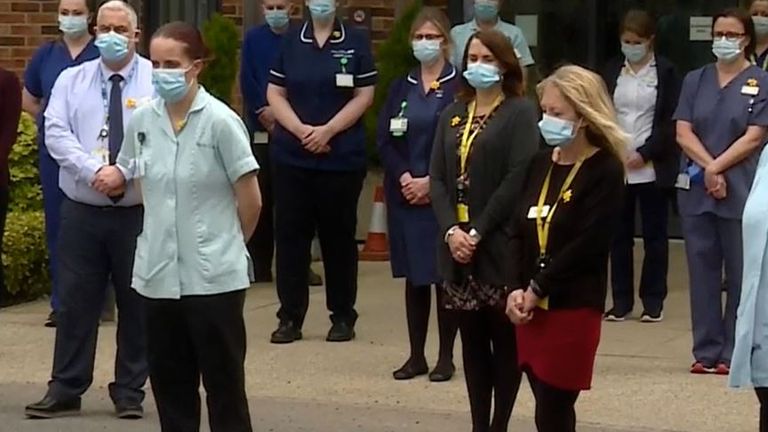 Minute’s silence held across UK to reflect on pandemic

It was a year ago to the day, that Mr Johnson told the country: “From this evening I must give the British people a very simple instruction – you must stay at home.”

The PM’s coments today come after people across the UK observed a minute’s silence to remember the victims of the coronavirus pandemic.

MPs and peers in both Houses of Parliament and ministers in the devolved nations marked the anniversary at midday, while cathedrals in Blackburn, Winchester, Gloucester and York Minster also fell silent.

NHS and social care workers also joined the pause for reflection, with the PM observing the minute’s silence privately.

At 8pm people are being encouraged to stand on doorsteps with phones, candles and torches to signify a “beacon of remembrance”.

The London Eye, Tate Britain, Blackpool Tower, the Scottish Parliament, Belfast City Hall and other landmarks will be lit in yellow on Tuesday evening to mark the occasion.

The Queen reflected on a difficult year for the nation as she led tributes, saying: “As we look forward to a brighter future together, today we pause to reflect on the grief and loss that continues to be felt by so many people and families, and pay tribute to the immeasurable service of those who have supported us all over the last year.”