From trains that crisscross the country to the chargers that power your electric car, cables play an essential role in moving electricity — and you — from point A to point B. In fact, materials that conduct electricity are fundamental to nearly all energy applications, including smartphones, heat pumps, and power tools. 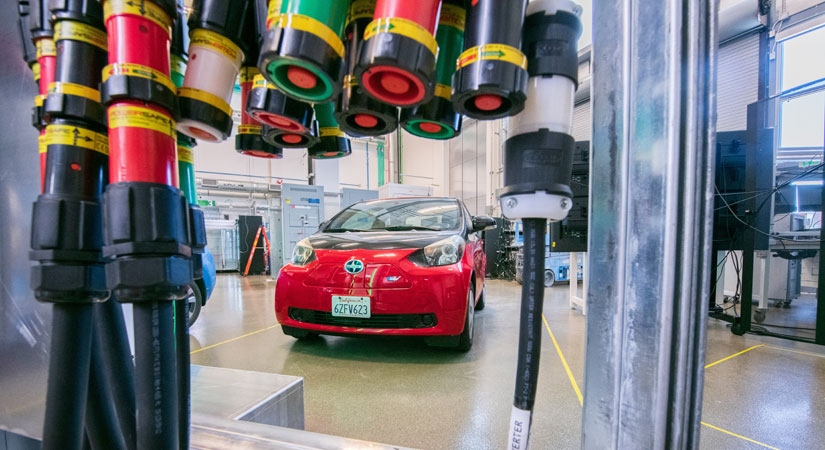 Join the CABLE Conductor Manufacturing Prize; help us develop the conductors that give U.S. industry a jolt of innovation. Photo by Dennis Schroeder, NREL

To connect all these devices alongside new, renewable power sources, the International Energy Agency estimates that we will need 10 million miles of new transmission cable, enough to travel to the moon and back 21 times. By improving conductors, we have the potential to make electricity more affordable, make the grid more resilient, and pave the way for the increasingly electrified industries of tomorrow.

In Stage 1 of the prize, competitors will submit their concepts to develop and manufacture conductors — with an electric conductivity enhancement an unprecedented 7–8 times larger than that of today’s best copper- and aluminum-based conductors.

“These cutting-edge materials could be the answer to vastly improving the efficiency of motors, which account for 85% of electricity consumption in the U.S. manufacturing sector,” said Matt Ringer, NREL’s Advanced Manufacturing Office Laboratory Program Manager.

Stage 1 of the prize is geared toward attracting and introducing conductivity manufacturing communities to each other and identifying unfamiliar aspects of the challenge. An informational webinar is being held on March 30 to provide participants with additional information about the prize, and all Stage 1 competitors are invited to the April CABLE Big Idea Workshop.

With an end goal of garnering innovative concepts from a wide range of competitors, including those not traditionally involved in conductors, Stage 1 accepts submissions that either substantially improve upon existing combinations of materials and processes or are an entirely new type of conductor material enhancement.

Scaling Up for Success

In Stage 2, competitors evaluate lab-scale samples of their material for conductivity. Stage 2 remains open to all innovators, with competitors invited to move their ideas from concept to actually fabricating conductor samples. DOE anticipates awarding up to $250,000 to as many as six winning teams.

The conductivity champs from Stage 2 advance to the third and final stage of the prize. In Stage 3, competitors fabricate manufacturing-scale samples for American-Made Network testing of conductivity and other characteristics. Teams will also be evaluated on their documented manufacturing process, scale-up plans, and cost. DOE anticipates that up to four winners will split a prize pool of at least $2 million.

In addition to the cash prizes, competitors in Stage 3 will be eligible for vouchers that will enable them to obtain services, resources, and CABLE Conductor assessments from DOE national laboratories and other American-Made Challenges Network providers.

“Concepts emerging from this prize have the potential to fundamentally change the grid, electric vehicles (including cars, trains, and planes), cables, motors, generators, and renewable power technologies,” said Ringer.

Are you ready to put your conductive creativity to work? Take the CABLE Prize challenge today.

Article courtesy of the U.S. Department of Energy, NREL.

What is Alzheimer’s, how common is it – and will new drug lecanemab help patients in the UK?
Ukraine War: Why is Russia not seeking regime change in Kyiv?
National Grid will not trigger power blackout prevention scheme tomorrow evening
Primark to open four new stores and create 850 jobs
Will Smith’s ‘deepest hope’ Emancipation film crew won’t be ‘penalised’ over his Oscars slap