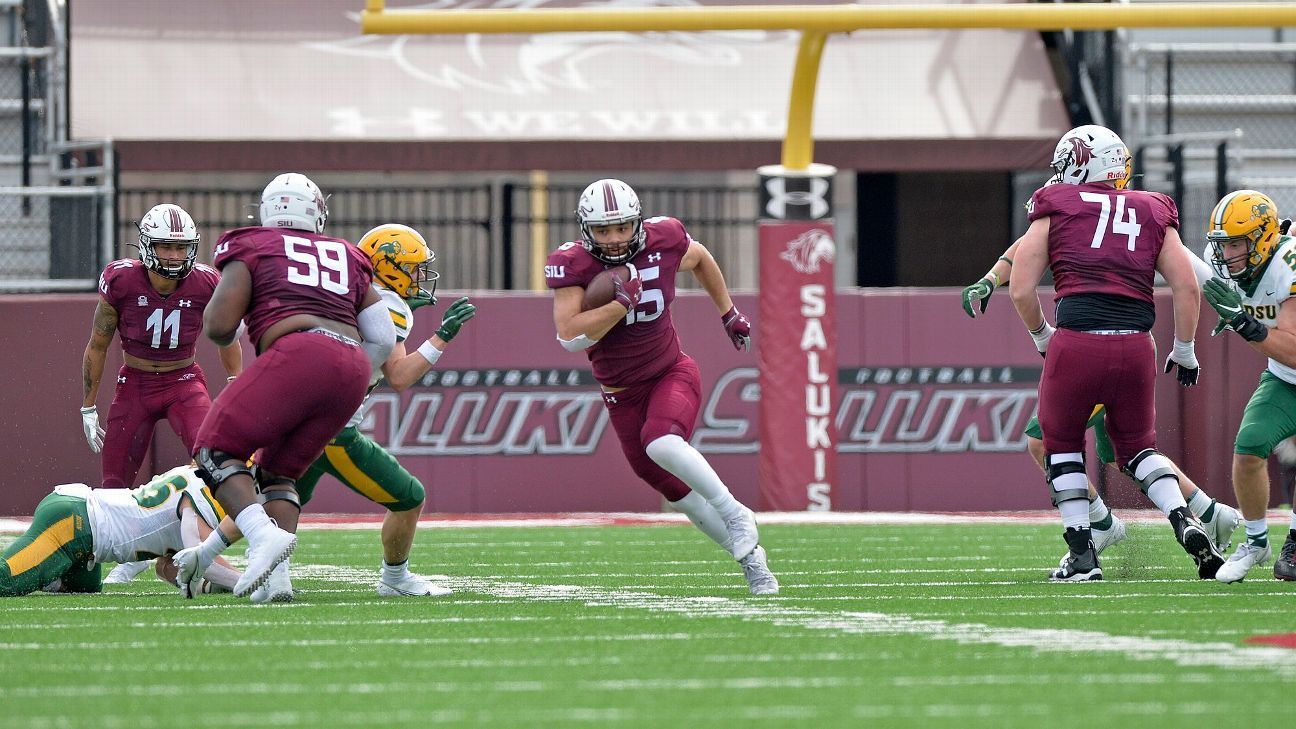 Are you not entertained? What the FCS spring season lacks in length and quality, it makes up for in pure, magical nonsense. The best program in the country got blown out by an unranked opponent two weeks ago, and the new No. 1 has now been scared twice into the second half. There were 31 games last week, and 19 were decided by a touchdown. Three went to overtime almost simultaneously on Saturday afternoon.

College football’s first run of March Madness has lived up to the moniker. And in the fourth full week of action, our eyes focus back on the Missouri Valley Conference, where, no matter what happens, some really good teams are going to be left out of a playoff spot in a few more weeks.

Note: Rankings listed below are the STATS FCS top 25 found at NCAA.com, and all times are Eastern.

FCS Bracketology and reckoning time in the MVC

‘Tis the season for Bracket Math, so let’s lay out how the FCS’ 16-team spring tournament will take shape when announced in mid-April.

You’ll have 10 conference champions and six at-large bids, so the autobids will look something like this:

Take those tentative champions out, and here’s how the rest of the STATS FCS top 25 currently takes shape:

Six of those 18 teams — and more importantly, four of the top five — are from the Missouri Valley. The MVFC would nearly fill a Joe Lunardi-esque Last Four In list by itself, and two more teams, No. 21 South Dakota and No. 22 Illinois State, are only an upset or two away from having a playoff case themselves.

There are five MVFC games on ESPN+ on Saturday, and at least four of them have major playoff implications.

In this topsy-turvy world of ours, it’s good to know we can rely on constants, even in the spring. Northern Iowa might be the best constant of all. The Panthers, you see, win with defense. Nasty, aggressive defense. In 2019, they won 10 games despite averaging only 21 points per game because they were only allowing 17.7. This spring, they’re fourth in the polls despite averaging 20.3 points per game. Why? Because they’re only allowing 11.3. They’ve made 17 tackles for loss with eight sacks — 300-pound Khristian Boyd (3.5 TFLs, 2.5 sacks) leads the way in both categories. They responded to a 24-20 loss to SDSU by suffocating Youngstown State and Illinois State by a combined 41-10.

Now UNI visits an SIU team that likes to take things in the other direction. The Salukis put up 38 points and 443 yards on NDSU, then put up 30 in the last three quarters against Youngstown State to overcome a hungover start and win 30-22. In the “styles make fights” department, this one could be fascinating.

As you expect with tiny sample sizes, the MVFC standings are a bit of a mess: North Dakota leads the way at a surprising 3-0 and very much controls its own destiny. But if the Fighting Hawks slip up, five teams with one conference loss could muddy the waters in a hurry.

Granted, a) a couple of those one-loss teams will have two losses after this week, and b) if UND loses, it’s probably not going to be to WIU. The Leathernecks are 0-2 this year after a blowout loss at SDSU and have lost 15 of their last 16 overall. This is a tuneup of sorts before maybe the biggest Nickel Trophy game of all time: They visit Fargo to play a wounded but angry NDSU next Saturday.

Any playoff chances Bob Nielson’s South Dakota squad have require smooth sailing over the next two weeks. The Coyotes host Bobby Petrino’s 1-3 Missouri State this weekend, then visit 0-3 Youngstown State the next before a brutal run of NDSU, Northern Iowa and SDSU in consecutive weeks.

Bobby Petrino’s MSU Bears were competitive in a couple of games with Central Arkansas last fall, but after barely getting by WIU two weeks ago, they were stomped 25-0 by NDSU last Saturday. They let a shaky NDSU offense get on track a bit in the big-play department, and they were held to just 3.5 yards per play with seven sacks. That last number could be of particular interest to Coyote linebackers Brock Mogensen and Jacob Matthew, who have six TFLs and two sacks in two games.

After two rugged road games — a 24-20 win at Northern Iowa and a turnover-driven 28-17 loss at North Dakota — SDSU returned home and handled its business against WIU. John Stiegelmeier’s fun and funky offense has produced big plays galore, many from the receiver duo of Jaxon and Jadon Janke (no relation … kidding, they’re twins), who have combined for 24 catches, 457 yards and four touchdowns so far. Backs Pierre Strong and Isaiah Davis are rushing 20 times per game at six yards per carry, and quarterback Mark Gronowski has an 80-yard run to his name.

YSU is coming off of its best performance of the season, a 30-22 loss to SIU, but SDSU likely has too much firepower here.

The last game of the MVFC weekend gives us another opportunity to figure out what the heck NDSU is capable of this year. Bison quarterback Zeb Noland put together his best performance to date against Missouri State but was still only asked to attempt 16 passes and still took a sack and threw a pick among 10 completions in those attempts. Running back Jalen Bussey was far too much for MSU to handle, and the defense indeed got rolling, but the one time the Bison offense was asked to come through this year — against SIU — it couldn’t.

This isn’t Brock Spack’s best ISU team to date, but the Redbirds will challenge the NDSU attack. They’ve allowed just 3.9 yards per play while racking up 16 TFLs, seven sacks (from seven different players) and 12 passes defensed in just two games.

To put that another way, they’ve got a much better defense than the SIU defense that got in NDSU’s face and held the Bison to 14 points.

We got a glimpse of the future in Jackson State’s 33-28 win over Grambling last Saturday. While most of the army of FBS transfers Deion Sanders is putting together haven’t yet become eligible, one that has — former Missouri linebacker and absolute specimen Aubrey Miller Jr. — made the play of the game.

The game itself was outstanding. JSU used a 20-0 run to build a double-digit lead at halftime, but Broderick Fobbs’ steady G-Men worked their way back into the game, taking a 28-27 lead early in the fourth quarter. JSU regained the lead, and then it became a battle of goal-line stands. First, Kenan Fontenot forced a Kymani Clarke fumble at the GSU 1, and Quincy Mitchell recovered to give Grambling one last chance at the win. Then, Miller returned the favor, charging off the edge and stripping Keilon Elder at the JSU 1. Keonte Hampton recovered, and Coach Prime’s Tigers moved to 2-0.

This was a pretty big deal. JSU hadn’t beaten Grambling since 2012 and had lost their last five contests by an average of 43-24. Sanders doesn’t yet have all of his big recruits in place but was still able to flash massive upside — Tyson Alexander rushed 17 times for 184 yards, and Jalon Jones completed 12 of 18 passes for 180 yards — and pull off a lovely win. And barring a hangover, they should be able to dispose of MVSU before a tricky four-game run (at Alabama State, Prairie View A&M, Southern, Alabama A&M) that will decide the SWAC East title.

Some more games to watch

Saturday afternoon: Holy Cross at Lehigh (noon, ESPN+).
The Patriot League season finally gets underway on Saturday, and defending champion Holy Cross is as likely a favorite as anyone. Quarterback Connor Degenhardt and shop-wrecking linebacker Jacob Dobbs should make the Crusaders pretty fun to watch.

Saturday afternoon: No. 7 Nicholls at No. 12 Sam Houston (1 p.m., ESPN+).
It’s a bit overshadowed by the MVFC’s big week, but this battle pits two top-15 unbeatens and could decide the Southland crown. Nicholls has been untouchable in a small sample, but SHSU has the offense to beat anyone.

Saturday afternoon: Rhode Island at No. 6 Villanova (1 p.m., FloFootball.com).
VU quarterback Daniel Smith and his new skill corps didn’t light the world afire in a 16-13 win over Stony Brook last week, but he did complete nine passes to Rayjoun Pringle for 171 yards and a score, and the Wildcats’ defense should be able to handle what URI has to offer now that the Rams finally get to make their spring debut.

Saturday afternoon: No. 15 Furman at ETSU (1 p.m., ESPN+).
The SoCon hierarchy is very much in flux at the moment, but 1-1 Furman probably needs a win over Randy Sanders’ Buccaneers to stay in the hunt. The Paladins saved their season with an overtime win over Samford last week, but the challenges aren’t over.

Saturday afternoon: No. 23 UC Davis at No. 2 Weber State (3 p.m., Pluto TV).
After last week’s game with Cal Poly was postponed, Weber State takes the field for its second game against Dan Hawkins’ Aggies, who knocked off a ranked Idaho a week ago. WSU’s Bronson Barron was dynamite against Idaho State, but the degree of difficulty rises here.

Saturday night: Northwestern State at No. 18 SELA (7 p.m., ESPN+).
SELA kept its Southland hopes alive by winning a field goal festival over McNeese last week. Now comes a Northwestern State squad that hung with Nicholls a lot better than expected last week. It’s a shame that Nicholls-SHSU isn’t a #SouthlandAfterDark offering, but this one should still be pretty fun.

Sunday afternoon: No. 10 Jacksonville State at UT Martin (2 p.m., ESPN+).
The OVC’s Sunday-centric schedules have looked good on JSU so far; after a 3-1 fall, they’re 2-0 in the spring with easy wins over Tennessee Tech and Tennessee State. The UTM defense could present a stiff challenge, though: The Skyhawks have allowed just 29 total points and 4.7 yards per play in two games.

December nursing strike ‘will be quite disruptive’, says RCN director
Father and siblings of Idaho victim speak to CNN about investigation
‘Living in a nightmare’: Kyiv families without water or electricity in suffering ‘worse than WWII’
Tesla reduces Supercharger prices as charging business matures
Alaska oil and gas lease sale is on because Joe Manchin insisted